What do I do with...emu eggs

Emu eggs, left and right, are shown next to a chicken egg. 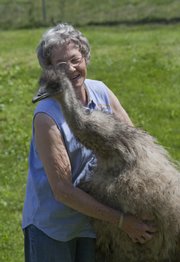 Ann Merkel of Sundance Emu Ranch, hugs one of her emus. She eggs produced by emus typically weigh between 1 and 2 pounds.

• Emus are vaued for their meat, eggs and oil, according to Lawrence breeder Ann Merkel.

• One egg typically weighs between 1 and 2 pounds.

Large, blue-green and spawned from sweet, goofy-looking birds, the emu egg is a children’s storybook drawing come to life.

When customers come by Ann Merkel’s Sundance Emu Ranch table at the Lawrence Farmers’ Market, she can almost see the wheels turning.

“Usually they go, ‘Oh my God, how many chicken eggs is this equivalent to?’ Because they’re thinking about how big an omelet they are going to have,” she says, laughing.

Adds her husband, Bill: “People aren’t used to green eggs. They talk about green eggs and ham all the time, but they’re not used to that.”

Yet there’s nothing funny or childish about the diversity of recipes in the emu egg’s recipe repertoire. Incredibly versatile, with a low moisture content, heavy percentage of yolk and a mild flavor, this comical-looking egg is an oversized brunch and dessert machine.

“I made a deviled egg once, which is a trip! ... I’ve baked cakes ... lots of omelets ... I made meringue for a pie,” Merkel says. “One thing I think would be good and I just haven’t done it — people like to make noodles because it has such a huge yolk.”

Indeed, one egg, which weighs between 1 and 2 pounds, contains enough yolk and white to equal 10 to 14 chicken eggs. Merkel sells the eggs for $4, and that’s a good deal, says Rachel Landers. Landers, 24, of Manhattan, bought an egg at the market and has designs to hold an emu egg tasting party with her friends before cleaning the shell and using it to make artwork.

“We’re going to have an emu evening,” Landers says. “I’ve been talking to (friends) and ... everyone is geared toward trying this experience. We’re going to go and scramble them up and partake.”

Bill Merkel is especially fond of scrambled emu egg, which he says is fluffier than with dishes made with chicken egg — though when he makes them up on weekend mornings at the ranch, he and Ann usually end up eating them for lunch and maybe dinner, too.

“That’s the biggest problem with them, is when you open one and scramble the egg, you’ve got scrambled eggs for four to sometimes five,” he says.

Ann Merkel began raising emus in 1994, just as a bird boom began to deflate. She survived the bust and now sells the eggs, meat and oil of the emu.

Why emu? While looking for a post-retirement occupation, she zeroed in on raising the birds because it was something she could manage by herself on the 80-acre farm she was born and raised on. She first became interested in raising ostrich, but the animal’s temperament scared her away.

Emus, on the other hand, let her take the eggs without much fuss, though she says she does spend time consoling the males, who play daddy day care to the eggs. After harvesting, the 200 or so eggs she gets out of her eight pairs of breeding birds annually go straight into a refrigerator set to between 40 and 50 degrees. At that temperature, she’s able to either hatch the eggs or sell them.

Some eggs can hatch in incubators after up to three months in the fridge, though most of the ones she hatches go into the incubators after a month. She hatches 20 to 40 babies a year, and the rest of the eggs are sold either to be eaten or to other breeders, who don’t have enough eggs. That she’s willing to aid other breeders isn’t surprising considering Merkel would welcome competition from other breeders — she says currently she and other breeders in northeast Kansas can’t raise enough birds to keep up the demand for the eggs, meat and especially oil of the birds. The oil is becoming a hit with the medical community and is being used to treat burn victims, Merkel says.

The eggs, though, are certainly a hit with Landers, if anything just from her artist’s eye because she had yet to eat her egg when interviewed. Though, as someone who grew up eating goose and duck eggs in addition to chicken eggs, Landers is sure the flavor will have her coming back for more.

“Those things are awesome — like a dinosaur egg or something,” Landers says. “I’m like, ‘Mmm, that looks delicious.’”