They and other members of Topeka’s Westboro Baptist church have gained notoriety nationally over the last few years for their strong stance against homosexuality and their unusual tactics of protesting events from military funerals to graduations and comedy. The church’s protests have led to legislation in 38 states prohibiting demonstrations near funerals, and church members have even been banned from entering Great Britain.

The church’s demonstrations often inspire counter-protests. Rarely, however, is the church and its views the focus of an independent protest, especially in Westboro’s own backyard.

Enter Chris Love and Bethany Rowell, the organizers of the Million Fag March, slated for May 30 at Gage Park in Topeka. Named to reclaim the “f word” from the church and its infamous “God Hates Fags” signs, organizers say they are challenging the type of intolerance that the Westboro Baptist Church epitomizes.

lawrence.com: I read that you don't expect to be changing any of the Phelps' minds. Are there any minds you are hoping to influence or is this more a means for like-minded people to get together?

Chris Love: I believe that the minds of the members of Westboro Baptist can't be changed. They've been at it for 30 years. They have no intention of considering outside views. In my opinion, this event is a gathering of like-minded people with the intent of letting the rest of America know that the fight for equal rights extends right up to Fred Phelps' doorstep. Even if we can't change their minds, it doesn't mean we shouldn't keep trying. 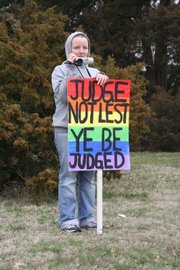 What are your expectations for the event?

This is an opportunity for each of us to stand up and speak out for something we believe in. What I didn't expect last year was that it would be so much fun, and that the hundreds of people who turned out would be such instant friends. I hope that happens again this year.

How cooperative has the city been with your efforts? 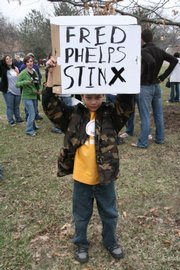 The city of Topeka has been thoroughly cooperative. Obviously when you have several hundred people gathering in a public space, the city is curious about details, but that's as much for our safety as everyone else's. They want to make sure they've got enough police on duty in case they're needed. They were present last year, but never inhibited our event. The city has actually been pretty great.

Have you run into any snags putting on this event?

Don't get me started! This is the second event I've ever put together (the first was last year's March), and I do most of the work myself. Talking to the police, making sure the park/amphitheater/etc. is available, getting the word out about the event. It's been a learning process, and I've hit several bumps along the way.

I had a walking route planned out last year, before learning I'd have to come up with several thousand dollars for road barricades. I put up a website and started advertising... and then had to change the date. I learned the day of the March last year that I wasn't allowed to amplify my voice in any way other than shouting (not even a megaphone), which made talking to the crowd difficult. It goes on and on. 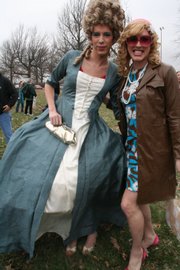 The addition of live music this year (from local bands Panda Circus, Samantha Clemons, The Snuggle Bugs, and oreaganomics) has come with new challenges, but things are shaping up much more smoothly compared to the first MFM.

What kind of response did you get last year from the people in Topeka?

For the most part we received a lot of support. Lots of people from Topeka came. Many of those who couldn't come emailed to show their support or helped spread the word around town. People in cars honked and waved all day long.

There were a few exceptions. A few hateful emails. One threatening comment on the website of the Topeka Capitol-Journal, which the police took care of. That threat was actually made toward the Phelps, and I don't condone it in any way.

Are you expecting the same or something different?

I expect the same reaction this year. Hopefully more people will be able to attend, although I was thrilled with the turnout last year.

Personally I've always been confused about what exactly Phelps and his church's agenda is (other than making people angry). What do you think it is?

Believe it or not, I've traded emails with Shirley Phelps-Roper several times, and -- to me -- her reaction to the MFM sums up their agenda as a whole:

I'll receive an email from her with paragraphs detailing the ways in which homosexuality is wrong and how I'll wind up in Hell if I don't stop supporting gay rights, In the next paragraph she'll tell me how much she supports our event and looks forward to it.

The members of the WBC honestly believe what they say. They believe that God hates homosexuals, and anyone that supports them.

But I don't think that's why they do the things they do. I believe the Phelps family sees themselves as defenders of the First Amendment. And they'll push the boudaries as far as they can to show that the right to free speech comes with the caveat that it extends to everyone, even when they're opinion seems horribly misguided (as I believe theirs is... and vice versa).

What do you think of laws banning places in public where Phelps can protest, like near funerals? Doesn't that violate his free speech?

I do believe it violates his right to free speech. In fact, it violates everyone's. The reason we don't hold the March right in front of Westboro Baptist Church is that Topeka has laws in place preventing such a thing. You can't hold a protest within so many feet of a church when a service is in session (and Westboro Baptist holds an all day service when the March comes to town).

We may hate what they say, but they have the right to say it.

Do you think homophobia is still pervasive, even if few people aren’t as outspoken in their prejudice as are the Phelpses? What is there to do about the homophobia that people experience in their every day lives?

I believe homophobia is still pervasive, although not as pervasive as it used to be. Generally I think it's just kept quiet. It's just not cool to be a homophobe anymore, I guess. And that's a great thing.

Still, everyone comes across it. The best thing to do is to not be polite about it. Speak up and say something. Here in the Midwest, we're raised to keep our mouths shut and not cause a ruckus. It's considered rude. And a lot of the time that's fine. But keep in mind that nothing has ever changed through silence and inaction.

Do you think the Phelpses do more to foster homophobia or reduce it?

The Phelps are so over the top with their message that I honestly believe they help reduce homophobia. No one wants to be associated with them. In all of the emails I've received that were against the ideas of equal rights, marriage, etc. I think every one started with something like "I hate the Phelps, but..."

Hopefully in the process of distancing themselves from the likes of the WBC, people will re-evaluate their views on homosexuals.

But we wouldn't give the Phelps so much attention if I thought they were actually doing a lot of harm. They're just a symbol. They give us a platform to speak to people who agree with their basic ideas, if not their methods.

The last six months have seen a lot of action in the gay-rights movement nationally. Why do you think this is happening now?

With two wars and a busted economy, everyone would agree America is going through a hard time. Luckily, America seems to have this habit of reflecting on who we are during hard times, and course-correcting if we need to. We look at everything around us and say "Is this what it really means to live here? Or is this what got us into this mess?"

We know that discrimination is responsible for many of the less-than-prestigious periods in American history. And while discrimination against homosexuals probably isn't the reason for the economy or the war, rough patches like this seem like the ideal time to "clean house" and fix some of the other problems we know exist, but haven't been talking about or haven't been focusing on.

The lack of equal rights for gays is one of those problems. Most of us know it's wrong. We just needed a reminder that sitting idly won't correct anything.