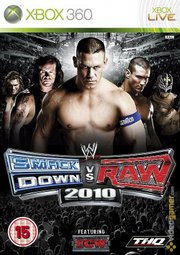 Although professional wrestling is not a sport, its video game equivalents are often similar to the yearly “roster updates” of professional sports games. Toss in a couple new, if minor modes, refine the controls a tiny bit, and ship that sucker out.

Thankfully, WWE Smackdown vs. Raw 2010 doesn’t fall into this trap. Instead, it offers the deepest professional wrestling package since the days of the Nintendo 64, and faithful “wrasslin” fans are rewarded with almost everything they’ve asked for in a WWE game.

Easily, the best feature in Smackdown 2010 is the ability to create. Players can create male and female wrestlers, detailed entrance animations, highlight reels, entrance movies, custom clothing and designs, and original storylines. Although the creation tools take some time to master, the ability to create realistic (or unrealistic, if you prefer) superstars and divas on par with the real life wrestlers is fantastic. In addition, many of these creations can be shared online in the Smackdown community, giving players a virtually unlimited number of roster additions, outfits, and plots.

The “Road to Wrestlemania” story modes will likely elicit a “meh” from the casual gamer. While the “acting” is somewhat laughable, the storylines are typical of what you’d see on WWE programming. There are a total of six campaigns available, with each centering on one superstar or diva, including one campaign designed exclusively for your created character. Playing the storylines unlocks additional content, including alternate ring attire, WWE legends, and new areas in which to destroy your opponents. In addition, the stats for your created wrestler can be improved in career mode, which is a no nonsense string of matches to gain the various solo and tag-team championships.

In offline gameplay, the games controls have been refined to near perfection. There is now one button to reverse all attacks, with proper timing being the difference between personal safety and being on the wrong end of a suplex. Character control is tight, and mapping of the various grapples to the right analog stick still feels great. The addition of a substantial training mode prior to the main menu screen does an excellent job of teaching the multiple button combinations necessary to excel when the bell sounds. The most substantial improvements, though, have been to the Royal Rumble match. Whereas eliminations had previously been without much rhyme or reason, the new mode has players hitting a series of buttons to toss their opponent out of the ring, or to cling to the top rope for dear life.

Online gaming, however, is a completely different story. Over a number of matches, there was a consistent half-second lag, which is brutally evident when playing a game dependent on timing. Although I do not, by any means, have a mach-speed internet connection, this has been the first game that has been virtually unplayable over Xbox live. Matchmaking is relatively basic, but functional.

The game’ graphics, by and large, look great. The character models have excellent textures, and the faces generally look like their real life counterparts. Skin looks moist with sweat without looking like wet plastic, and different types of cloth reflect light differently. However, longer hair tends to look very rubbery, and the facial animations are nearly as melodramatic as the line delivery. The arenas and crowd give a great sense of size, depth and activity. The ropes on the wring, though, appear to elastic. Sound effects are relatively sparse, but serve the wrestling atmosphere well. The music is, well, wrestling game music.

As has always been the case in wrestling games, clipping and collision detection continue to be an occasional issue, especially when two opponents differ substantially in size. Given the large variation in character size, this is somewhat understandable, but still annoying.

Replay value, at least until next year’s game, will depend on two essential factors. First, will the online play ever be patched to eliminate lag? With any sports (or sports-ish) or fighting (or fighting-ish) game, stable online play is a must. Second, how big of a wrestling fan are you? Dedicated fans will likely be consumed with creating classic and dream wrestling scenarios, custom and legendary wrestlers and videos highlighting their conquests in the squared circle.

Overall, WWE Smackdown vs. Raw 2010 is arguably the best wrestling game since the genre’s pinnacle, WWF No Mercy. Outside of the travesty that is online play, the game grants nearly every wish of the fanatical WWE gamers, and should provide hours of entertainment for fans of the series.