The Worst and Worster of Yahoo! Answers 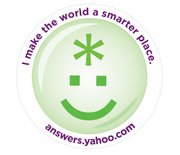 If by "smarter" you mean "the exact opposite of smarter," then yes.

There’s a theory of collective wisdom that believes crowd sourcing will always provide the right answers. It’s a theory that assumes if you pool enough people together, the proper response will inevitably rise to the surface—sort of an intellectual Darwinism.

And then there’s Yahoo! Answers. Yahoo! Answers is an open forum where anyone can post any question about anything and then anyone can answer anything to that question. The internet being the internet, maturity and reason prevailed. People treated one another with dignity and respect, and thoughtful dialogue flourished. And I almost peed myself a little bit from laughing as I typed that.

Yahoo! Answers, while frequently providing a useful service, just as frequently makes the Jugalophiles over at 4chan look like Seneca debating stoic philosophy before the Plebian Tribunes. Hey, when did I become Dennis Miller?

Thankfully the kind Tumblr Master over at Yahoo Answers (no exclamation mark, no lawsuit apparently) has archived the greatest Q&As from Yahoo! Answers. It’s another invaluable single topic site along the same lines as Regretsy and STFU Parents. Laugh at and despair for our internet brain trust. And this is just a fraction of the stuff over at Yahoo Answers. A warning, though…a good chunk of that stuff is filthy.

I would have told the mermaid guy to marry Ethel

If God doesn't want us to drain blood from our body, why does the priest drink it in church with the body cracker?

Is there a chant or spell to call Batman particularly? I do believe that Batman is real in my heart forever.

Q: Can a Jedi lightsaber cut through Batman? A: Of course not. Jedis aren't real.

Shoot. I hate it when I have a babby in high school and it makes me miss the homecoming dance AND youtube videos.