Review: Wizard of Oz — Beyond the Yellow Brick Road (DS) 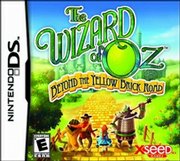 When asked to review The Wizard of Oz: Beyond the Yellow Brick Road for DS, I didn’t expect I would like it. At all.

First off, I typically enjoy role-playing games about as much as out-of-staters hilariously telling me we’re not in Kansas anymore. And I’d never heard of the game, and figured it would be just another piece of Nintendo DS shovelware.

Thankfully, the 20+ hours spent with the game proved to be much better than what I’d anticipated. Beyond the Yellow Brick Road solid (if a bit basic) RPG that DS gamers — kids as well as adults — can get into.

Like any other variation on the Oz tale, the story begins with Dorothy being whisked away to Oz by a tornado. After that, though, the plot takes a rather significant turn from any other Oz story I’ve encountered. After engaging the Scarecrow, Tin Man, and Cowardly Lion in battle, each decides to join you in your Wizard-dictated quest to defeat the four witches of the land.

The witches have little in common with their book/movie counterparts, either in name or moral alignment. Instead, they are based on the four seasons, with their kingdoms (witchdoms?) based on these themes. Each of the witch’s worlds is comprised of three levels, which in turn are comprised of three maze-like stages. As you traverse the stages, you fight random battles and mark signposts to signify completed paths, dead-ends, and areas where you’ll backtrack later. The enemies you encounter in random battles are not (as I remember, at least) traditional Oz characters; they include ghosts, sea anemones, boars, and a host of other, non-flying monkey baddies. The story is somewhat ho-hum, but the bits of exposition between the main worlds and at the end are well written.

The stylus-based gameplay is simple. Movement is controlled by a virtual trackball in the open areas, while battle is controlled by a capable menu system. If you’re not a big fan of mazes, you’ll likely tire of them quickly. The battles are turn-based, which is typically yawn-inducing for me, personally, and the characters fall into stereotypical RPG roles. Dorothy, Scarecrow, Lion, and Tin Man function as your cleric, thief, wizard, and fighter, respectively. However, each turn only allows you to use a certain pairing of characters, adding a decidedly strategic element. Boss fights are legitimate chess matches of spell and item use, as well as fighting.

Both the settings and the characters are rendered in 3D, and done relatively well for a DS game. The stages are varied in appearance, capturing different facets of the seasonal themes. The characters have designs close to those in the original books. However, due to the first-person view in battles, you see little of any of your characters other than Dorothy and the completely worthless Toto, which is a shame. This view makes the battles less engaging than they could be, as you see random slashes and effects, instead of the characters performing your commands.

The sound effects and music represent two ends of the sonic spectrum. The various fighting sounds are repetitive and bland, and add nothing to the lackluster battles presentation. However, the music throughout the game is extraordinary. Although you are listening to the same cyclical songs throughout the stages, the tunes don’t get annoyingly old, and are not as saccharine as one would expect, given the nature of the license.

In terms of length, the game will likely seem short to RPG veterans. My save data indicated a completion time of roughly 20 hours, although I’m sure it was probably somewhere closer to 25. However, as a portable game that will likely appeal more to less-experienced gamers, the length is adequate. Replay value will likely be somewhat limited, as the amount of spells, weapons, and armor upgrades can easily be achieved during the first play through.

Wizard of Oz: Beyond the Yellow Brick Road is a game that will fly below the radars of many gamers. Although it is, by no means, on the level of Final Fantasy, Chrono Trigger, or even Pokémon in terms of length and depth, it is an above average RPG with a lot to offer the casual gamer looking for a portable adventure.

Ha ha. I understand. I'm sure the graphics on level three just needed to be tightened up.

If only the game designers had gone to Westwood College. Then, and only then, could I have had the virtual testicular fortitude to award this game with the 0.123 necessary to make numrich purchase this game. Damn you, lack of American digital cable channels in Japan.

When will Adam Sessler be able to fully impose his might on the Land of the Rising Sun?