As a result of KU's four-game losing streak, we're gonna bill this one as a "throwback game" to the "good old days" of contesting a superior opponent. Little hope remains of contesting for the Big XII North title or making a (respectable) bowl game, so it's really all about pride as senior Todd Reesing and the Hawks try to salvage what they can from a disappointing season. Sinking the revived Huskers would be a good start...

Opening reception: "I Think We Are Making Progress" @ Wonder Fair 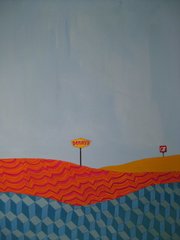 Participating artists in the show: 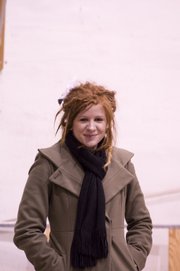 A multi-media art event ties together visual and performance art that explores the constantly changing earth and body processes. New visual art works by Alicia Kelly, Kelly Kearns, and Monica Gundelfinger are presented as well as a new performance piece choreographed and performed by Jenny Hoyt and Anne Bruce which will be performed at 7:30 pm.

A new release from Danny Pound will be toasted Saturday night with a complete live play-through by Pound and David Swenson.

With a decade of experience in the local music scene, Pound is the kind of songwriter that we should feel lucky to call our own. Since splitting with indie outfit Vitreous Humor, Pound has been reincarnated as the ghost of Gram Parsons —a bar-burning troubadour with a country love affair and a rock and roll heart. Equally entertaining as a solo performer and with his band, Pound splits his time between melancholy originals and would-be-hits lost in the backroads of the Nashville machine.

The Lawrence Art Guild is turning the former Solidarity! Revolutionary Center & Library at 1109 Mass. into a new art gallery. Volunteer Marge Banks does some painting in the interior of the old building.

Opening Reception for "Lawrence Does Lawrence"

The Lawrence Art Guild and the 1109 Gallery are proud to present its latest show, “Lawrence does Lawrence,” featuring local artists and their artistic impression of Lawrence. Over 60 new works of art will be presented. This show will also feature the entire collection of donated artwork which includes works by David Melby, Charles Rogers and Native American rugs.

The Lied Center of Kansas presents Soledad Barrio and Noche Flamenca performing an evening of authentic Spanish flamenco including dance, song and music. 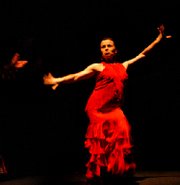 Celebrated for its transcendent and deeply emotional performances, Spain’s Noche Flamenca is recognized as the leading flamenco touring company in the field today. Under the direction of Martín Santangelo, the company stages performances with the essence, purity and integrity of one of the world’s most complex and mysterious art forms.

Brendan Benson's public stock rose considerably when he formed a back with Jack White called The Raconteurs, but those familiar with Benson's body of work know that he's been trading in power-pop perfection for years. His new solo album "My Old, Familiar Friend" continues his streak of infectious releases influenced by acts like Joe Jackson, Elvis Costello, and The Kinks.

When it comes to the Delta blues, it's easy to get lost in a retroist mindset that overwhelms the immediate power of blues music in the present. Minneapolis-based songster Charlie Parr could well have been plucked out of a Harry Smith Anthology, but his songs are his own. He accompanies himself with National resonator guitars, 12-string guitars and gut-string banjos, informed by the stylings of influential pickers like Rev. Gary Davis and Dave Van Ronk.

It was only a couple years ago that Suzannah Johannes started writing songs and performing; first as a solo artist, and then with backing from Ghosty's David Wetzel and Josh Adams. Eventually the whole Ghosty camp joined her, and her debut four-song EP thusly became a full-bodied affair that plays to each member's laid-back skill set.

Tyler Gregory can regularly be found busking on Mass. St. with his deep voice and steam-powered melodies bouncing off the street-side architecture. His sturdy songcraft takes cues from WWII-era blues bellowers like Leadbelly and Son House as well as modern folk artists like William Elliott Whitmore and the Avett Brothers. With his brother Todd on drums and percussion, Tyler Gregory & the Blue Shuffle have fast become a fixture anywhere cheap beer is served.

Check out our podcast interview with Gregory.

A Serious Man
Imagine Job as a physics professor in 1967 Minneapolis and you get the flavor of this unsettling, shaggy, surrealistic pillow of a movie from the enigmatic Joel and Ethan Coen. Starring Michael Stuhlbarg as a professor sorely tested by the events in his life, the film is mixed bag more funny-strange than ha-ha.

2012
Roland "The Day After Tomorrow" Emmerich serves up cataclysmic effects showcasing what volcanoes, tidal waves and earthquakes will do once that fabled Mayan calendar runs out on 12-21-12. It's simple spectacle with moments of humor and humanity tucked into "Disaster Movie's Greatest Hits." Watch our on-camera review or check out our story on 2012 and the Mayan prophecies.