Roland "The Day After Tomorrow" Emmerich serves up cataclysmic effects showcasing what volcanoes, tidal waves and earthquakes will do once that fabled Mayan calendar runs out on 12-21-12. It's simple spectacle with moments of humor and humanity tucked into "Disaster Movie's Greatest Hits."

That’s the year popularly believed to be the end of the ancient Maya calendar. Roland Emmerich’s new movie, which finished No. 1 at the box office with $65 million this weekend, uses the apocalyptic date as a springboard to show the end of the world on screen with a melee of CGI and special effects. But ultimately that’s where its association with “2012” ends — the movie never really gets into the numerological significance of its title, instead using the date mostly as a marketing ploy.

And that’s too bad, really. While the movie “2012” has been widely panned as a shallow disaster-porn flick, the cultural phenomenon surrounding 2012 is a fascinating rabbit hole.

Googling “2012 phenomenon” takes you down that rabbit hole. On one end are the modern-day prophets whose books and articles indulge visions of the end of the world as we know it — using the Maya calendar as evidence that the apocalypse or a shift in consciousness is nigh.

On the other end are scientists like Kansas University anthropology professor John Hoopes, a specialist in pre-Columbian civilizations, including the Mayas. His take on the 2012 phenomenon is that it’s fertile territory for Barnums and hucksters.

“Nowhere in the databases of science does it say that the 2012 date is the end of the Maya calendar,” Hoopes says.

“Fear sells,” he says. “Unfortunately, a lot of gullible, uninformed people will be deluded by (such) misrepresentations.”

Hoopes has seen the movie “2012,” and he says it’s entertaining. But he says the handful of references to the Maya calendar in it are just that: references without any context or depth.

“The movie’s plot draws upon both the biblical story of Noah’s Ark and Plato’s legend of the lost continent of Atlantis. In 2012 lore, these are used to create a new mythology that teaches moral lessons: People should respect nature, love one another and not be selfish. For me the spinning of new mythology — using ancient roots to communicate modern morality — is the real story here,” he says.

“My own feeling is that the appropriation of the ancient Maya calendar by individuals seeking to promote a specific ideology — as well as fame and fortune — is similar to the appropriation of Native American spirituality by the New Age guru who’s now being charged with the tragic deaths of three individuals at a sweat lodge retreat in Sedona, Arizona.

Hoopes says there are hundreds of books on the market about 2012, and the KU professor occasionally engages some of the more prominent authors in debates online or through publications. 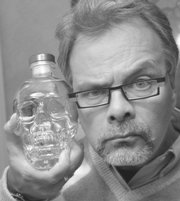 John Hoopes, KU Director of the Global Indigenous Nations Studies Program and Associate Professor in the Department of Anthropology.

Our conversation about the 2012 phenomenon with KU professor and Mayan culture expert, John Hoopes

Among the more popular of those 2012 authors is Daniel Pinchbeck. Pinchbeck’s 2006 book, “2012: The Return of Quetzalcoatl,” was so popular it made him something of a frontman for the cultural phenomenon.

“Looking into Maya myth,” Pinchbeck writes to lawrence.com, “we see that they believe in world cycles that end with cataclysm and regeneration, and it seems very plausible that they saw 12/21/12 as the shift into a new cycle.

“I do not pretend to have all the answers, and I also have no desire to capitalize on fear. In fact, my perspective on ‘2012’ is that we can use it as a window of opportunity to inspire a positive shift in planetary culture and consciousness,” he writes.

“Most people who look at my work without a mean-spirited bias or sour-grapes envy appreciate my efforts to be intellectually rigorous and personally honest about the subject matter,” Pinchbeck writes.

Hoopes acknowledges sour grapes may have entered the mix. Here’s Pinchbeck, writing books, making money, getting serious media attention from The New York Times and the like ... “It’s hard to swallow,” says Hoopes, “and all that seems to come to him just for basically making things up.”

What’s made up and what’s rigorous scientific inquiry can seem hopelessly impenetrable for the casual observer in 2012 debates. In a 2007 article (online at lawrence.com/2012), Hoopes, Pinchbeck and other players exchange dozens of earnest comments on the topic — but it’s hard to make anything of it without having studied Maya anthropology.

The ancient civilization of the Maya spanned four millennia (circa 2500 B.C. to 1500 A.D.). They were one of the first civilizations to employ the concept of zero, yet they never discovered the wheel (or, at least, never used it). They were a highly cooperative society, yet they ritually practiced human sacrifice.

The Maya (the often misused term “Mayan” refers only to the culture’s language) had a predilection for developing complex systems of measuring time. Without the distractions of TV, computers and light pollution, they became expert sky-watchers. Observing the cyclical movement of heavens, the Maya concluded that time was also cyclical in nature.

Unlike our linear conception of time — beginning at a fixed point (creation) and traveling forward in a straight line — the Maya had a continuum consciousness, seeing time (and creation) as an interlocking system of cycles and ages, always returning to a regular series of conjunctions, on which the Maya placed great spiritual and social importance.

The movements of Venus, for example, determined propitious times for waging war and so — being sanctioned by the heavens — the Maya famously had no fear of warfare. The so-called “Long Count” calendar, or Great Cycle, was 5,125 years long — starting about 5,123 years ago.

Apocalypse Soon? What the Maya calendar really tells us about 2012 and the end of time (Archaeology, Nov./Dec. 2009)

It's Not the End of the World: What the Ancient Maya Tell Us About 2012 (FAMSI)

'The 2012 Phenomenon': A historical and typological approach to a modern apocalyptic mythology (M.A. thesis by Sacha Defesche, 2008)

More links to sources on the 2012 phenomenon online

Jose Argüelles, born in Minnesota in 1939, is generally credited as the father of the 2012 movement.

In his best-selling 1987 book, “The Maya Factor: Path Beyond Technology,” Argüelles blames human disconnection from the natural world, and attendant ills, largely on the Gregorian calendar.

He promotes a worldwide switch from the Gregorian calendar to a cycle of his own making, extrapolated in part from the Maya calendar.

Argüelles claims to have channeled a 7th century Maya prophet who related that 12.21.2012 will “close out not only the Great Cycle, but the evolutionary interim called Homo sapiens.”

In that closing moment, a rainbow of human consciousness will arc from pole to pole, and we will all flash from this place into the heavens.

Decades before the movie “2012” entered popular culture, countless writers like Pinchbeck had elaborated on this meme. John Major Jenkins has written eight books on the 2012 topic, including his most recent published last month. He says he’s disappointed in how the mass media typically approaches the subject.

“The media have a hard time refraining from harping on doomsday predictions,” he writes in a comment posted on lawrence.com/2012. “It’s very seductive and alluring. And it distracts us from looking at the thing-in-itself — the philosophy and tradition developed by the ancient Maya that relates to 2012. Can we examine and appreciate that paradigm without it having to narcissistically and hysterically relate to us? Can we study and appreciate it in the same way we might appreciate the Upanishads, or the Druids, or Hellenistic philosophy? I think we must learn to pierce the B.S. veil before we can even know how to approach what 2012 is,” he writes.

Hoopes expects the 2012 phenomenon to last well beyond the date’s passing.

“The most compelling mythologies always emerge after a perceived ‘transformative’ event has happened. I anticipate that, regardless of what actually happens in December 2012, after the fact some people will be telling stories about their epiphanies and mystical visions, probably including some imaginative ones about ETs, revealed texts and the like,” he says. “The past is far easier to manipulate than either the present or the future.”