Stephen King reads from his book "Ur" with the Kindle 2 electronic reader at a news conference for Amazon.com in February. 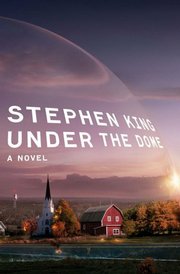 So says Stephen King: a man who just published a story in the New Yorker and a review of the Raymond Carver biography in the New York Review of Books. He also has a piece in the horror mag Fangoria and a poem in the current issue of Playboy. Anything else? "Under the Dome," his 51st novel, all 1,072 pages, drops this month. He just finished a five-part graphic novel for DC comics, as well. In his spare time, perhaps between putting away the breakfast dishes and waiting for the computer to boot up, he wrote a musical with John Mellencamp.

We'll get to that. Let's get the obvious stuff out of the way first. No, he's not spooky. Anyone who expects a creepy guy with a ghoulish laugh probably thinks Vincent Price sat around the house in a black cape, casting spells. King is an affable, funny, gracious, effortlessly conversational fellow. He could be a guy you worked with in a college restaurant who'd dropped out but knew lots of stuff and had some interesting ideas.

A normal fellow - except for the part about being one of the most successful authors in human history, the American answer to Dickens.

His latest, "Under the Dome," might be described as "'The Stand' Under Glass." It has the epic length and apocalyptic character of his eschatological pandemic classic, but instead of a cross-country tale of harrowing collapse, the story unfolds under a clear dome that seals off a small town in Maine (just north of Castle Rock, for all you Constant Readers). It can't be breached. There's no explanation. How things fall apart, how ordinary folk react to extraordinary, inexplicable circumstances - these are timeless King themes. So perhaps it's apt that they come together in a book he's been working on for longer than half of his fans have been alive.

"I started it in 1976, got about 75 pages into it - and then I saw what the scope of the thing was going to be, how many technological issues it raised, and I buckled. I'm not a sci-fi writer; I don't know a lot about technology, so I thought I'd try again, set it in an apartment building, and then I wouldn't have to deal with what the weather would be like under a dome. But I didn't like any of the characters, so I put it away."

When he returned to the book years later, he had help with issues most of us don't confront in our jobs: the proper way to amputate a leg, meteorology in closed systems and the consumption rate of LP gas, which matters a lot when you're cut off from civilization, all you have is propane, and most of it's been diverted by the bad guys. But King had the same question as the readers: What caused a typical American town to be cut off from the world on an ordinary October day?

"I knew what was generating the dome, but I had no idea who or why or what. I think things happen, and we don't understand why; one of the great attractions of some stories is the uncertainty."

That's his strong suit, really; the uncertainties provide more delicious shivers than the answers. "From a Buick 8," a novel about the Maine Highway Patrol that also happens to be about a car from another world that spews nightmarish flora from its trunk, has no answers. We're not really sure what happened in the '20s at the Overlook Hotel in "The Shining," are we? There's a handful of smoke at the heart of his best stories. Is this any different?

"I went into this with a commitment to letting the reader know they find out why it all happened. In a book this long, the reader deserves an explanation."

That's reader, singular. Not "readers." It's a one-on-one relationship. At this point in his career, the 62-year-old King has extraordinary creative latitude, but he doesn't write to the readers' expectations; he writes first for himself and the work.

"With 'Under the Dome' I wanted to write a story that's all story," he said. "I wanted to amuse myself, because if it doesn't interest me, it won't interest anyone else."

When he first starting selling big, he hit a sweet spot that seldom happens in publishing, and is rarely maintained over decades: instant connection with a large audience. It was as if the subconscious of the era was a downed power line, sparking and dancing, and King just happened to pick it up and plug it in.

Or so it seemed. The success annoyed some critics, who regarded the books as the literary equivalent of a big tub of buttered popcorn. The much-praised movie version of "The Shining" was seen more as director Stanley Kubrick's work than King's, and the pop-cult mulch that King heaped around his stories made it easy to dismiss them as things you'd take to occupy the hours on a beach vacation. "Misery," a lean, horrifying and grimly comic account of a popular fiction writer held captive by a sweet crazy fan, was the first book it was OK for critics to like, it being meta and self-referential and all that cool stuff.

Since then he's alternated between enormous tales of things unworldly, and spare novels whose brisk economy intensifies the unsettling effects. "Under the Dome" is definitely the former. But is this the unexpurgated version?

"The original manuscript was longer, but it's not like 'The Stand,' which was cut by 600 pages. Not that there was anything wrong with it - the kind of book-binding Doubleday used back then made it impossible to be printed as one volume. So I said yes to the cuts - I needed the money!"

When the uncut version of "The Stand!" came out 10 years later, King had to update the pop-culture references.

"I tried as much as I could to move the book from 1978 to 1988 ... I didn't want it to be something caught in the past - you want to believe the flu is happening the day after tomorrow."

But keeping up with pop culture is more difficult now; things arise faster and become passe just as quickly.

"If you read 'Under the Dome' closely, you'll see my blind spots. There's a reference to Facebook, but not to Twitter - that's the Internet I don't understand." He laughs about the one pop-culture event he missed completely: "My sister read it, and said, you know, there's something like this in the Simpsons movie. The whole town is under a dome. At least someone in the book should mention it."

If the movies don't get in front of you while you're typing, politics will:

"In the first draft of the book, the president is consistently referred to as she, because I was convinced that Hillary Clinton was going to win. It's hard; all this stuff becomes obsolete. Things move on. When you write it, you're a prisoner of your time."