This Week In Celebrity Fail 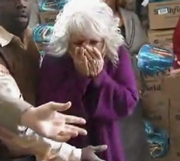 Tila Tequila plummeting to earth, like an Icarus with melting wings of congealed KY, seemed to trigger an avalanche of celebrity fail over the weekend.

It was hard to pick the best or most notable of the lot, so I'm just packing them into a single, giant fail wad. YOU'RE A FAIL WAD! Shut up. NO, YOU SHUT UP! A failwadsayswhat? WHAT? Gotcha! NOOOOO!!!

We'll start with Paula Deen, the Food Network celeb-u-chef whose Southern style cooking is a controlled substance under FDA guidelines, getting beaned by a frozen ham. If you look closely, she's bleeding butter and whiskey.

UPDATE! Well, it looks like Paula Deen's influence is deeper and wider than the river of gravy which chokes her heart...the video has been yanked from Youtube. If you can't see it above, you can watch it here!

Next up is Adam Lambert, who injured himself during his performance at the American Music Awards. No, not from the tumble he took on his Erection Set jungle gym, but from a pulled groin suffered by pulling multiple groins.

And lastly, also from the AMAs, Jennifer Lopez landing on her duff after descending a flight of man stairs. I'll let the obnoxious celebrity show who packaged this clip take care of the obvious puns and butt jokes. Thanks for doing all the heavy lifting, guys! Ha! It's heavy because of her giant ass! You never saw that one coming! I'm gifted!

Booo...Paula Dean clip has been removed. :(

Thanks for the heads up, Victoria! In the meantime, as I wait for crafty Youtubers to circumvent copyright law, you can watch it here:

Replaced that one as well...we can play this game all day, Dick Clark Productions!

What I love the most is that after she's hit in the face with the ham, her husband (the dude on the left with the white beard) is totally unphased by it all, as if nothing has happened! A little reaction might be appropriate, dude. That is so weird and hilarious!

I hadn't seen the Adam Lambert clip yet. HAHAHA! Loving the falls. I can't help but laugh at people falling, especially when those people are celebs.