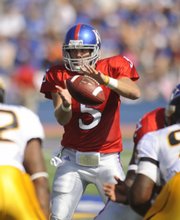 The 4-0 Kansas Jayhawks open the Big XII Conference season with a homecoming game against Iowa St., which lost a last-second heartbreaker to K-State last week.

This year’s self-guided tour features around 50 artists at 21 sites around Lawrence — see our google map for specific locations. See our full preview of the event. 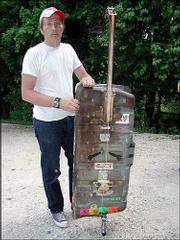 Split Lip Rayfield's Jeff Eaton holds the upright bass he constructed out of a gas tank and a single string of weed whacker line.

Split Lip Rayfield started taking shape about the time Bill Clinton was getting situated in the oval office. The group's fifth studio album "I'll Be Around" is its first collection of new material since 2004's "Should Have Seen It Coming." It's vintage Split Lip: blazing-fast banjo and mandolin licks balanced by high-lonesome ballads and a healthy sense of humor. Listen to our podcast preview of SLR's latest album.

Wonder Fair Art Opening: "Collecting the Past and Projecting the Present" 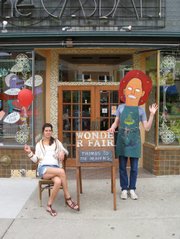 It's opening night for this new exhibit by Lawrence artists Casey Millstein and Monica Gundlefinger. Our podcast interview with the artists covers their search for beauty in art, flaw flaunting, and a breakdown of what exactly that mysterious title means! Get ready for something very....post-modest!

A woman paints with The Black Sheep Art Collective.

The Black Sheep Art Collective mentors and provides space for young artists in Arizona. They have produced many mural projects and exhibitions of work from emerging indigenous artists who may not have otherwise had the opportunity to develop their artistic voice.

Tonight's introductory session offers the Lawrence community a chance to get to know the Black Sheep Collective. While here, they will work with several Haskell Indian Nations students to complete a series of panels that will form a mural to be installed at the 4 Winds Center at 15th and Haskell. Check out our podcast preview of the events.

Kylesa is a punishing six-piece metal band from Savannah, Georgia.

Cadillac Sky and Olassa @ The Bottleneck

Cadillac Sky is a high-lonesome acoustic act that plays a range of originals and covers spanning Bill Monroe to Death Cab for Cutie.

Opener Allison Olassa plays a sort of timeless music that’s as free and loose as Gillian Welch. Her songs are made of the stuff that Walnut Valley Festival regulars adore: earthy melodies, slice-of-life lyrics, plucky instrumentation, and a voice that sticks to your soul.

Listen to our podcast interview with Miss Allison Olassa.

Those Darlins could probably get away with just being three cute gals playing classic country songs (it's how they started, at least), but they rev the engine by electrifying the whole shebang and making it sound more like The Ramones than the Carter Family. The group's goodtime country-punk is a hoot and a holler polished off with a shot of Old Overholt on songs like "DUI or Die" and "Snaggle Tooth Mama."

Couple's Retreat
This is what life might have been like if the guys from "Swingers" had grown up, moved to the suburbs and turned into lame, sitcom cliches. Jon Favreau and Vince Vaughn team up again for this broad comedy about four couples who go on a tropical vacation together. You wouldn't mind getting voted off this island.*1/2
View showtimes