"It Starts With Murder," a film by Lawrencian Rob Gillaspie

Take an Agatha Christie mystery, inject it with John Waters' raunchy camp, bathe it all in primary colors and fake blood, and you've got something resembling the new film out of Lawrence, “It Starts with Murder!”

This less than low-budget labor of love has been three years in the making, and it's finally going to see its big screen premiere at Liberty Hall. The improbable journey of this intentionally trashy epic would make Ed Wood proud.

“It Starts with Murder!” is — at its black-humor heart — a murder mystery, a sort of “10 Little Indians” with gobs more swearing and sexuality. Guests at a gaudy island resort (in this case, interior shots of the Jackpot Saloon and the filmmakers' basement stitched together with exterior shots of a Mexican beach resort) start dropping like flies, meeting the business end of a masked murderer's knife. Fortunately for the island's hapless law enforcement, one of these guests happens to be world-renowned super sleuth, Miss Mandrake.

Stills from "It Starts With Murder!"

Mandrake is a booze swilling widow, always at the ready with a silver flask and a drawling Georgia jibe. She starts nosing around to find out which of the unseemly suspects is the real killer. Is it the philandering talent agent? The mute rice cakes spokes-model? The nymphomaniac heiress? The leering man of God?

As is frequently the case with über indie films, the duo — a real life couple also known about town as Scary Manilow and Curvacia Vavoom from the sleaze rock band, The Spook Lights — wore multiple hats throughout production. Gillaspie was also cinematographer/editor/musical composter, and Nightengale also served as lead actress/costumer/set designer.

“I don't know why we didn't anticipate it was going to take this long, especially when you consider how huge the script was and that we were doing everything ourselves,” says Nightengale, who played Miss Mandrake on top of her production duties. 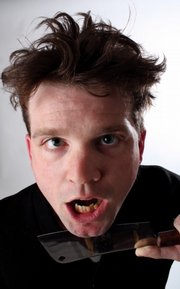 Rob Gillaspie, director of the new locally produced film, "It Starts With Murder!"

“And we had to shoot around everybody else's schedules, because it's not like they were getting paid. We didn't expect we weren't going to have no life at all for three years. Our lives were work, movie, and band. We didn't go on vacation, we didn't get to go out at night — we had no life at all.”

“I was mad with power thinking we could push this through in two months,” admits Gillaspie, who has made short films in the past, but never anything of this scope (“It Starts with Murder!” runs roughly 2 and a half hours).

“I thought about this a lot while we were shooting, but everyone's idea of a 'low budget' movie is a movie that still costs $3 million to make. We shot this movie for $500, on a camcorder, in our house. I multitasked while writing it. I wrote most of it at Quintiles while I was working there to save up for a camera.” 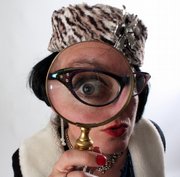 In an economic environment as gruesome as his movie's murders, Gillaspie may actually be on to something with his skid row budgeting. Studio chiefs have been axed at Disney and Universal, and Hollywood is desperately searching for low-cost alternatives to their usual multi-million dollar gambles. Take a film like “Paranormal Activity,” a horror movie made for $15,000 and largely filmed in the director's own house — it's now gaining national buzz as the next “Blair Witch Project.”

Micro-budgets are the new black.

The low financial stakes seemed to inspire the cast of (“It Starts with Murder!”, most of whom had as little experience acting in a feature film as the director and producer did making one. 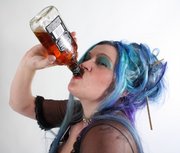 “Having no budget took a lot of the constraints off,” says Misty Nuckolls, playing the trampy heiress whom she describes as an “even trashier” Anna Nicole Smith.

“You didn't feel like you were spending anyone's money, just their time, and everyone was having a great time. It was like we had permission to completely let loose and have a ball. My favorite aspect was the complete freedom. Rob wasn't telling you what to do at every moment. He gave you the script, gave you an idea, lit the thing and let it roll.”

Adri Perndergrass — who makes her big screen debut as the foul-mouthed daughter of the gigolo agent — discovered exactly how low the budget was early in the production. 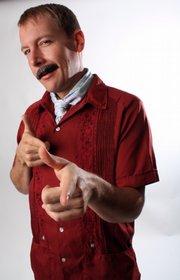 “One of the first scenes we were shooting, Nathan Cadman — who plays my father — and I are setting in the Jackpot and the set kept falling down behind us,” recalls Pendergrass. “At one point in the movie I'm leaning against the wall trying to hold it up. There's a brief second in there where you can see it falling down.”

As far as Gillaspie is concerned, the more you can see the cheap seams of the film, the better.

“It's all about intent,” says Gillaspie. “I think a lot of movies that are just bad were intended to be good movies, but are just unaware that they're bad — pretty much anything Michael Bay makes, for example. We were trying to play the melodrama straight, like an old soap opera. If you play it super straight, that makes it twice as funny. We were trying to make it camp.” 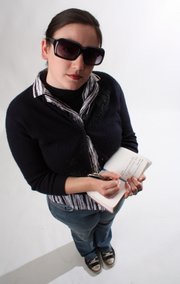 At least the cast is in on the joke. “I think of it more as a comedy,” says Pendergrass. “The script is really good. It's very engaging and it even has some suspenseful moments. As a whole, it's a comedic thriller.”

“Think of the campiest thing you've ever seen, and you're not even close,” says Nuckolls. “Everyone dies in fabulously lit and horrifically gory ways. It's just fun. There's one scene where I'm in a bathtub and a naked gentleman is using the toilet right next to me. I held back laughter for so long I couldn't take it anymore. I started thrashing around and ended up knocking over a lovely little statue and breaking it. That was one of the most hilarious experiences in my life.”

That people might not “get it,” where the audience at the gala Liberty Hall premiere may just sit in stony silence when they're supposed to laugh, is causing the filmmakers a bit of consternation.

“We made this movie because it's a movie we would want to watch,” says Nightengale. “We're obviously very driven by cult movies and outsider stuff. We love those movies and we wanted to make a movie that had all of those elements. I'm excited that this kind of movie is going to be at Liberty Hall in a big theater. If our friends in the community of cult film lovers didn't like, then I'd be disappointed. What will really upset me is if no one finds if funny.”

Well, if it bombs, the experience of making it was its own reward. “When everybody there is a volunteer and they're doing it for the love of the project, you definitely develop a camaraderie,” says Pendergrass. “I made a lot of new friends.”

That trailer is f#@%%# awesome!! Can't wait to see it. I was worried when the article said she had a southern accent, but Curvacia totally rocks it. VaVoom!

Might want to add that said trailer is NSFW. Love the article, and thanks for using the few shots that didn't make me look like a drooling moron ;)

thanks guys! what a great write-up. looking forward to wednesday!!!

Why only a dollar? I so hope I can be there!