"The Moon For Its Citizens," book release and reading by Wallace Cochran

Add “Man of Letters” to “Musician” and “Mustache Farmer” on the list of Wallace Cochran’s vocations. The other 50% of old timey troubadours Drakkar Sauna, Cochran is now a published author with the release of his first book, “The Moon For Its Citizens.”

It’s a strange book, both in content and physical form, structured as a history of space travel written from the perspective of the 23rd Century. This “creatively non-fiction” account of man’s fascination with rocketry acts as a complement to Drakkar Sauna’s latest album, the similarly spacey “20009.” Wallace Cochran was kind enough to answer some questions from a confused reader about “The Moon For Its Citizens.”

lawrence.com: Your book is, shall we say, unorthodox. You describe it in the preface as "an attempt to reverse engineer our understanding of experiment and travel by rocket device." This probably isn't going to be on Oprah's Book Club or adapted into a film starring Tom Hanks. How would you describe the book to those of us accustomed to Dean R. Koontz novels and Tyler Perry movies?

Cochran: Dean R. Koontz fans have probably found their bliss, so I don’t know I can offer them anything. To Tyler Perry fans I say: imagine Medea and Joe going to family counseling with a bananas strict Jungian and discussing their relationship, Medea and Joe’s, w/r/t Isis and Set.

The book came out of a series of songs about astronauts based on an idea of writing a long fiction piece with astronaut technology at its core, which produced more songs for the cycle that became, the song cycle, interstices to the action of the book. I’d say 20009 is the epicycle and "The Moon For Its Citizens" is the deferent.

What's the connection between Swiss psychiatrist Carl Jung and first man on the moon Neil Armstrong? Or 7th president of the United States Andrew Jackson and German filmmaker Fritz Lang? What's the common thread uniting all of the historical actors throughout your book? 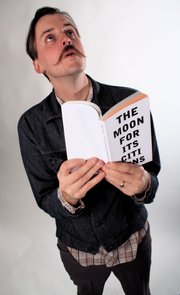 I use a quote from Jung as an epigraph: ‘If the highest values wear out, if they lose their shattering, numinous quality, then there is naturally the greatest danger.’ In a more general sense, Jung and the later analytical psychologists have done the most, to me, interesting study of Egyptian myth and technology, alchemy, Hermeticism.

Andrew Jackson, during the Creek war, used rocket weapons in battle, and Fritz Lang not only commissioned the first German rocket in Herman Oberth’s scale model for the premiere of "Frau im Mond," but also, in the same film, invented the countdown to a rocket launch, which is one of the only things about rockets most of us are familiar with.

How long did this take you to write? How long has rocketry been an interest of yours? How grueling was the research for, and construction of, this book?

The initial writing took about a year. The editing and rewriting took another seven months. The research and writing were like a vacation. ¡Hay tanto! All seven of the Mercury astronauts have autobiographies, in some cases several. Daniel Lang, Deke Slayton, Norman Mailer, Michael Collins, and Andrew Chaikin all wrote about the Apollo missions. Most of the researches on Hermes and alchemy were begun reading Mary von Franz and Eliphas Levy and I barely dented their canons.

I think von Franz recorded, transcribed, and published everything she ever said aloud and it was all about Egypt and Jung and sky-cocks and mandalas. Ingo Swann wrote about ‘space-side’ brains from the future floating in organized, hostile patterns in invisible cities in the moon.

"Penetration" is worth finding.

Ernest L. Norman wrote "Tempus Interludium: Interdimensional Solar Mechanics (Of Atoms and Astronauts)" that I think is about string theory and polio—and chemotherapy and Nixon—and is the second book of a three book seminar on self-actualization.

Let’s only take a moment to mention "Behold! The Protong, Plus" by Joseph McElroy, and William T. Sherman’s war memoir, and Isaac Newton’s weirdo life.

The actual physical format of the book is interesting. The cover feels almost like human flesh and the shape of the book is similar to a pamphlet. What was the reasoning behind the aesthetics of the book? Does it tie in at all with the themes contained therein?

A. F. Jamison and Curtis Knapp at MPH did all of the layout and design. I think they were trying to comment on, and be complementary to, the text. Mr. Jamison said to me he wanted the book, for the reader, to be tender. This might explain the Videodrome-like new-flesh of the cover.

In the final calculation, how much of a pain in the ass was it to write and publish a book? Is authoring novels something you'll pursue in the future?

Well, any pain is subjective. Ass pain, doubly so. I had a good time. I wouldn’t want to calculate how much I would have made an hour if instead of writing the book I would have gotten a job repairing electric vibe-drippers or collecting aluminum cans. But I can’t stop now.

No, seriously, what the hell is this book about?

It’s about the history of the future. You should read it.

An excerpt from page 69:
"The importance of militarism to the modern development of the rocket cannot be overstated. The g-ds of the ancient world were murderers, drakkars, conquerors, and with the exception of some schools of Quaker and the Indian Janists, so are ours. 'Remember Set!' was the holler of more than one English battalion going over the top at Gallipoli, the Pope and his sordid diocese invented vampires, when Muhammad declared a general amnesty on returning to Mecca he still beheaded the comedians. But...rocketry was never going to advance if left to the Bishops, pastors, and Imams."