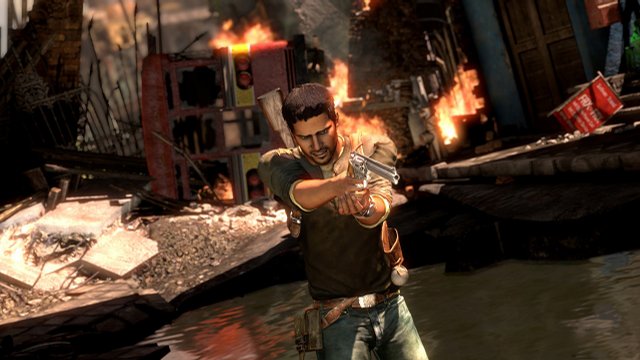 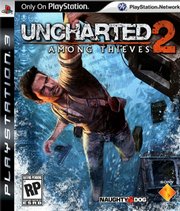 Nathan Drake returns in developer Naughty Dog’s third-person, platformer shooter hybrid and fires on all cylinders as it delivers one of the best experiences this generation.

The original Uncharted received praise for its deep story that unraveled much like an Indiana Jones tale as well as refining the shooting and climbing system begun by Tomb Raider. This installment now integrates stealth mechanics, an updated fighting system and more cinematic elements that come together and make you feel like you’re in control of a high budget adventure movie.

No contemporary game can be fully praised without the addition of a strong online multiplayer element and Uncharted 2 is no exception. Various online modes provide addicting gameplay with enough unique touches to sway players away from their current favorite online game. This is one of those games, if not THE game, you purchase a Playstation 3 for.

Nathan Drake has been compared to many protagonists, the most popular being Lara Croft and Indiana Jones, but these are basic similarities to a character that really stands on his own. He is an explorer with his eyes on the financial prize and doesn’t sweat breaking an international law or two. Money is not his only drive, however, for he has a fascination with exploring areas thought to be fictional or hidden in the volumes of ancient history. He is crass, sarcastic and consistently dealing with sexual drama in one form or another. These elements make him a compelling hero to control for this new installment that has him hunting down Marco Polo’s trail and discovering what happened to his missing fleet hundreds of years ago. The story is presented just like a Hollywood film, complete with diverse camera angles and lots of different shot transitions.

While Uncharted 2 is just as amusing to watch as it is to play, it leaves very little to cut scenes and allows the player to interact with most situations, something too often missing from even the strongest titles. As a result, what you are doing in a level will also change, so you won’t simply be shooting and/or climbing in each level. For example, some encounters force you to run down war-torn city streets avoiding a military truck or escorting an injured cameraman — whatever the situation, you must quickly adapt and change playing styles.

Combat is versatile, allowing you to clear an area of enemies however you may choose. While the previous title had pretty much the same moves and options as this one, tweaks to the battle system improve your control of the situation significantly. In Unchartered 1, stealth attack options were scarce, but in this version I was frequently able to pull enemies off cliffs or take them out from behind walls. Once you’ve been seen, it’s back to traditional Uncharted action by either shooting or beating up enemies. The AI’s aim has improved, making a full-on charge to beat up an enemy almost pointless because they will now more realistically shoot you dead before you can. Brawling is rarely an alternative to shooting but is sometimes a useful secondary attack.

Gunplay has seen few changes, which is fine because it didn’t need much, but becomes more intense because enemies no longer hide back and instead come right for you. Popping in and out of cover to take out someone who’s getting just inside grenade range supplements the already frantic nature of encounters. Most guns appear on a regular basis and usually have ample ammo so there’s really no need to ration any firepower — which is either a plus or minus depending on your gameplay preference. For my part, I think scare weaponry a la Halo 3 ODST would have been more consistent with the storyline.

The graphics, while only in 720p, are some of the best on the Playstation 3 with an amazing attention to detail and vast draw distance. Almost every element in a mission is alive and can be manipulated with its own set of physics, allowing the whole experience to be more immersive and believable. Just like the previous game, the environments are predominantly outside in lush jungles and mountaintops during the day — vivid colors often lacking in other games come to life in Uncharted 2. 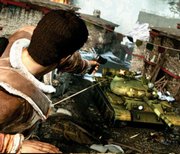 Uncharted 2 is also a treat for the ears with grand musical scores to complement the beautiful graphics like John Williams to a Spielberg film. Music and voice elements are planned well, keeping track of what you’ve already heard so that you never hear the same remark repeatedly, say after dying and restarting a checkpoint — instead you either get a new quip or silence.

The campaign is long, about 12-15 hours, but you won’t be spending any of that time wondering when it’s going to finally be over. In fact, you work so hard to further the plot and move forward that once it’s over you almost feel a sense of regret for completing the game. When I beat the original Uncharted, I immediately jumped back in and played through a second time and this is exactly the case, if not more so, with Uncharted 2. Thanks to an array of difficulties and the use of unlockable bonus items, any player can justify playing through this title multiple times.

While the campaign admittedly is the best aspect of this game, the online multiplayer shines almost as bright. No matter what your preference of online gaming is, from cooperative missions to deathmatch to objective-based team matches, Uncharted 2 excels. Up to three players can work together to complete the included missions that focus solely upon teamwork. At the highest difficulty, even the best of explorers will have to put their skills to the test to complete the mission. Deathmatch games are played in limited size maps to insure that any campers can be found and handled quickly, a problem seen often in Gears of War games that utilize a similar cover mechanic. The integration of jumping and climbing also makes for unique hiding spots, but beware because you are completely exposed while on an edge or wall.

Objective-based team games handle up to ten players on two teams working to capture and hold as many of three designated stations or fighting to recover treasure items in a neutral zone. There is a system of levels, money, and unlockable medals that keep you coming back, much like the leveling system in Call of Duty games.

Uncharted 2 has been charging full speed ahead on the hype train ever since gameplay was revealed this summer. With such a high expectation set by the developers and the industry, it is impressive that this title not only met, but topped those expectations. An eclectic mix of gaming for all types both in the online and offline modes proves that developer Naughty Dog knows what it takes to be a true AAA title in contemporary gaming. This is not a game you’re trying to beat, but rather an experience you get so hooked on that you can’t help but play again and again.

If you don’t own a Playstation 3 yet, this is the most compelling reason to go get one, if the lowered price wasn’t already reason enough — otherwise, you will be missing out on what is quite possibly the best game to come out this year.

I totally felt the 'regret' you mention in blazing through this game; beat it on Hard within days of release, immediately went back on a Normal difficulty to find the rest of my treasures and started Crushing mode over the weekend. Got my Platinum trophy last night. Oh yeah, I started playthrough #4 last night as well...nothing left to unlock or collect and I still feel compelled to play it again!

The multiplayer I've been playing since the first Beta and am hooked enough to actually have put Metal Gear Online on the shelf (for now) for the first time in over a year.

Kudos to Naughty Dog on an amazing gaming experience.