Ghost Stories That Are Real

Most of the time these ghost stories take the form of scary movies ("Paranormal Activity" being a great example) or scary TV shows ("Ghost Hunters" and "Ghost Adventures" being really stupid examples). But those are all fake, especially "Ghost Hunters" and "Ghost Adventures." God those shows are awful. It's much more fun to have the crap scared out of you by reality, and the following stories are ghost stories that turned out to be bona fide.

These three tales of the terrifying and true are from Cracked, the website that used to be a magazine who made Mad look like McSweeney's and Utne Reader gave birth to a Conde Nast property. How'd you like that increasingly arcane string of print media references? You liked it. Anyway, good job, Cracked...even though you call them "Urban Legends" instead of "Ghost Stories." But let's not fight.

"A prop at a carnival was discovered not to be made of the usual combination of papier mache and carni spit, but human skin and bone. All the little kiddies at the haunted house had been poking and giggling at a real, mummified dead body."

Elmer McCurdy's corpse in the first half of the 20th Century.

"Apparently the smell wasn’t just coming from the convict manning the corndog stand. Back in 1976, a camera crew filming an episode of The Six Million Dollar Man began to set up in the haunted house at the Nu-Pike Amusement Park in Long Beach, Calif.

As they were moving aside a 'hanging man' prop, they accidentally knocked off its arm and discovered human bones inside. Bionic, this poor sap wasn’t.

The story gets stranger. The body was actually that of criminal mastermind Elmer McCurdy, who was killed in a shootout after robbing a train in 1911. The princely sum old Elmer got killed for? $46 (and two jugs of whiskey). 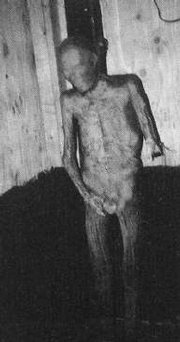 Elmer McCurdy's corpse in the second half of the 20th Century.

McCurdy was embalmed by the local undertaker, and apparently the guy was so darn pleased with his work that he propped up the corpse in the funeral home as evidence of his skills. People were charged 5 cents to see the corpse, which they paid by dropping a nickel in the cadaver’s mouth. Remember that little bit of history the next time somebody turns their nose up at you for liking Hostel 2.

Think it can’t get any stranger? Oh, you naïve fool. After several years of raking in the nickels (how exactly these coins were retrieved after being dropped into the corpse’s mouth is something probably best left to the imagination) our enterprising undertaker’s scheme was ruined when McCurdy's brothers showed up to claim him. Of course, these guys weren’t his brothers at all, but wily carnival promoters. From that point on, McCurdy’s mummy went on a morbid mystery tour all around America, popping up at carnivals all over the country before finally coming to rest in Long Beach.

McCurdy is now buried in Oklahoma. Because McCurdy apparently had the most entertaining corpse in history, they prevented anyone else from taking him on tour by dumping concrete on top of the casket. No, really." —by Nathan Birch

"A sick woman arrives at a hospital and when the nurses withdraw blood it is so toxic that it begins making everyone around her sick too. Realizing they're dealing with the human embodiment of the creature from Alien, the nurses flee for their lives."

"On the evening of February 19th, 1994, Gloria Ramirez was admitted to a California emergency room, suffering from an advanced form of cancer. 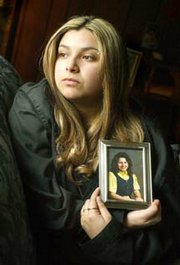 Evelyn Arciniega, with a photo of her mother, Gloria "Toxic Woman" Ramirez.

When a nurse drew Gloria's blood she detected a foul odor, so foul in fact that hospital staff started gagging and even collapsing around her. Eventually as many as 23 people were affected. The ER was evacuated and a decontamination unit brought in. So more like the creature from Alien crossed with a fart, but still.

The case was quickly written off as mass hysteria, but considering that the worst affected victim spent two weeks in intensive care suffering from hepatitis, pancreatitis and avascular necrosis (a condition which literally causes your bones to die) we'd say either this was some serious damned hysteria or the guy who decided that got his degree from Dumbass University.

As for Gloria, she died just 40 minutes after arriving at the hospital. Her autopsy was performed by men in full hazmat moon suits and, despite one of the most extensive forensic investigations in history, it's still not known what exactly turned this woman's blood into toxic sludge. Granted, the experts on the case have refused to take off their hazmat suits since that day, and have now retreated to a small island which they have surrounded with barbed wire, but those are probably just the usual precautions."—by Nathan Birch

(Even more from Cracked here)

"So all those convoluted puzzles and traps the Jigsaw killer uses, they're all just so ridiculous, right? Who would actually go through all that trouble?

So then you run into somebody on the Internet who heard about how a real guy showed up at a bank and said he had an explosive collar around his neck that would deposit his brains all over the walls unless he robbed the bank on behalf of a criminal mastermind. 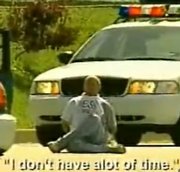 Brian Wells moments before the bomb around his neck detonated.

"On a day like any other in late August 2003, pizza deliveryman Brian Wells was about to end his shift when a fateful order came in. The directions given to Brian led him to a winding, deserted, dirt road that ended at a lonely TV tower. Now most people upon arriving at the spooky deserted road would have just tossed the pizzas in the ditch, but not Brian Wells. He was dedicated to his minimum-wage delivery job.

What exactly happened on that dirt road is still subject to debate, but what we do know is that around an hour later he reappeared at the aforementioned bank, with the collar contraption around his neck, a homemade shotgun shaped like a walking cane in his hand, and a note demanding a quarter million dollars in cash.

Unfortunately for Brian he was about as good at robbing banks as he was at avoiding obvious horror movie set-ups, and was apprehended by the police in the parking lot. The cops quickly discovered the collar, but just took it for a stylish ticking fashion accessory, and didn't bother to call the bomb squad for nearly half an hour. By the time the bomb squad did arrive, the collar had gone off, blowing a 'postcard-sized' hole in Wells's chest.

The police found a list of tasks on Wells's body, each of which were to be completed in a set period of time or the bomb would go off. Poor Brian was doomed from the start though, as it was later determined it would have been impossible for him to execute all the tasks even if everything had gone according to plan. He simply hadn't been given enough time.

...supposedly all those responsible for putting the collar on Brian Wells have since been caught and charged."—by Nathan Birch

(Gobs more from Cracked here. And I should add you can very easily find video of the Exploding Collar incident with a basic Google search. It's extremely disturbing, so I'm not posting it here. What you do with your own time, however, is your own snuff porny business.)