Last-minute Halloween costumes for the cheap and indecisive

If you haven’t assembled your Halloween costume yet, shame on you! Being poor or busy or distracted by swine flu or “balloon boy” or how awful the Chiefs have become are not viable excuses.

The best way to kick this recession in the keister and shake off our national doldrums is to buy silly outfits and get stupid in the streets. We can forget our problems by forgetting ourselves and dressing up as morons. Think of it as your duty as a patriot.

If we don’t support Halloween, the candy and alcohol industries — and therefore the heart of America — could collapse. To help you along with your civic duty, we’ve thoughtfully provided some costume suggestions. These are timely, budget-conscious options and some can be put together simply by raiding your closet or pantry. No need to thank us. 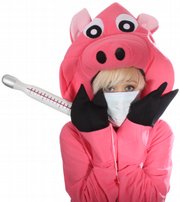 If you really want to terrify people, capitalize on pandemic paranoia and dress up as swine flu! For a fun couples costume, have your partner put on a silver wig and carry a giant hypodermic needle for “Kathleen Sebelius, H1N1 Slayer.” 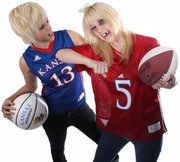 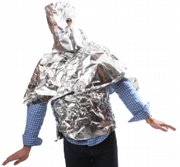 Dress up as the infamous aluminum balloon which captured America’s attention for no good reason. Maybe you, too, can get swarmed by cable news cameras! (Falcon Heene not included in this balloon either.)

Tin foil courtesy of your kitchen. 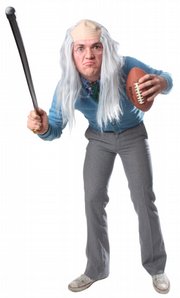 He’s out of retirement to break more records and possibly his hip! Commemorate the 40-year-old quarterback’s exhumation from mothballs by smelling like them! 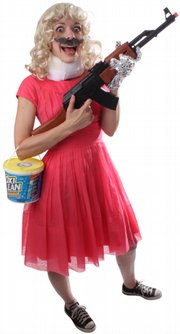 Can’t decide which deceased celebrity from 2009 to dress up as? Go as them all! It was a busy year at the Mortuary for the Stars this year, so save time and honor everyone’s memory at once by going as Farrah Swayze Cronkite Jackson Kennedy Hughes Mays.

Looking for something even easier? Try our convenient cut-out masks — from local favorites like Coach Bill “Careful With That Axe Or You May Hurt Your” Self to national figures like Sarah “Hockey Maim” Palin (as seen in Vanity Fair!)

Or if you've already come up with a sweet costume, why not share it with your fellow readers below...