Net Worth: The Monster Engine combines tots and terror

It’s no secret that Halloween is my favorite holiday.

The lone yearly observance that avoids both sentimentalism and jingoism, Halloween also appeals to two of my favorite things: sweets and horror.

I’ve yet to find a way to write a Web-based column about candy, but I have devoted numerous “Net Worths” to scare-oriented themes. The one about Kindertrauma.com comes to mind, as do previous columns about romantic comedy trailers recut to look like horror movie trailers. “Poltergeist” ads. Bigfoot. “Family Circus.” Etc.

So I was already a smidge tapped-out when trying to devise the perfect Halloween-themed column this week. That was until a trip to the in-laws last weekend.

My daughter, now age 6, spent most of her car ride drawing monsters on her flip pad. One of the highlights was a piece she called the “hypnotizing monster,” a red fiend with a swirling circular eye, fanged mouth and, apparently, a toupee. (Keep in mind this is the work of a kid.)

This amusing little sketch reminded me of a perfect Halloween Web site for all ages.

The Monster Engine is based around a single intriguing premise: What would a child’s drawing look like if painted realistically?

Dave DeVries, a Marvel Comics artist who also created monsters for Universal Studios, claims on his site, “Those monsters weren’t as cool as the ones I saw lurking in my niece’s sketches. ... I decided to take all the lessons about color, action and detail and apply them to little kids’ drawings.”

The concept — which is also a multimedia book, a live demonstration/lecture and a gallery exhibition — allows DeVries to take the simplest doodle and turn it into a vivid, compelling piece of art.

One is inspired by 7-year-old Kimberly’s crayon composition of a horned being flinging some object while taking a “boo” pose. In the elder artist’s hands, it becomes a crimson devil attempting to balance on a tightrope while losing grip on a fish. The use of contrast and colors suggests paintings from the Spanish Inquisition.

Another by 7-year-old Chelsea is nothing more than a penciled blob with eyes and a jack-o’-lantern mouth. The interpretation turns it into a menacing green ogre emerging from an icy lake.

The talented DeVries reportedly has plans for other “engines,” including ones dedicated to superheroes, the circus and the undersea world.

I doubted DeVries had enough lead time to interpret my daughter’s drawing in his own monstrous way. So if any burgeoning artists are interested in taking their own stab at the concept, her “hypnotizing monster” resides at the bottom of this article. 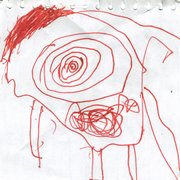 Lola Niccum/Special to the Journal-World

Send your rendition as an attachment to my e-mail address, and I’ll gratefully post it on the site.

Think of this as a Halloween contest but without prizes.