Fans of DC heroes can now hold their heads high thanks to Batman: Arkham Asylum. Not only did Rocksteady Studios’ finally make a good Batman game, they made the best comic book game to date.

The game opens with Batman transporting the Joker to Arkham Asylum, a secluded island setting famous for housing Gotham City’s most infamous criminals. Of course, the Joker escapes thus thrusting Batman into the game. 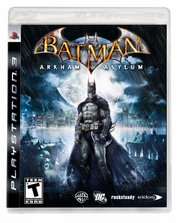 The gameplay is a mixture of action-adventure and beat’em-up and is similar to the controls featured in Assassin’s Creed. Early in the game, adequate hand-to-hand fighting can be achieved using basic button mashing, but, as the game progresses, frequent use of counter-moves and batarangs will be necessary in large groups of lunatics. Stealth is also necessary in many areas, using grapple points and ventilation ducts. Instances of direct and indirect combat are well balanced and challenging. Efficient, error-free fighting earns Batman experience points, which can be used to purchase combat, gadget, and armor upgrades.

As any Batman fan can report, the gadgets at the hero’s disposal are one of his main selling points, and these “wonderful toys” are necessary to unlock additional game features like character biographies and challenge maps. Throughout the levels, the Riddler (who doesn’t appear in the game) has hidden clues, trophies, and interview tapes, as well as a map of the locations of these treasures. Collecting these items not only earns additional experience points, but also teaches the player about the history of the Batman universe. Substantial backtracking through past levels will be necessary, much in the style of the Metroid and Castlevania franchises.

The graphics, both in terms of the characters and the settings, are top notch. Although an asylum doesn’t sound like the most beautiful setting, the variety of level types and designs are intricately laid out. The immersive quality of the island is immediately reminiscent of Rapture, the underwater city in Bioshock, as the varying level designs feel authentic to the game’s reality.

Of all the heroes in comic book lore, Batman claims arguably the greatest rogues, and they are most definitely on display in this game. Aside from the Joker and Harley Quinn, players get some sweet face time with the Killer Croc, Poison Ivy, Scarecrow, Bane, and Mr. Zsasz. Each of the villains, as well as the Dark Knight, have designs unique from their comic, cartoon, and/or movie counterparts, with personalities pooled from all of the media in which they have appeared.

Voice work in the game is superb. Kevin Conroy and Mark Hamill, respectively playing Batman and the Joker, were both stars of the ’90s cartoon. Sound effects and music are also great, with the latter sharing elements with earlier releases in the Batman franchise.

Replay value will vary, depending on the gamer. After completion of the main story, players have the ability to continue scouring Arkham for missed clues, but an additional play-through will not yield any new results.

There are very few gripes to be had. Yes, the camera can be somewhat fidgety. And the boss fights, aside from the morbid meetings with the Scarecrow, are fairly basic. But neither of these minor quibbles are enough to scare anyone away from an overall excellent game.