Todd Reesing and the Kansas Jayhawks kick off their highly anticipated 2009 season against Northern Colorado.

“The sound of confusion and celebration” is how the Ad Astra Arkestra describes it’s sound — and with as many as a dozen members onstage, you can bet there will be plenty of both. Initiated by Ad Astra Per Astra's Mike Tuley and Brooke Hunt following the departure of members Kurt and Julie Lane for New York, the eclectic group has performed in many incarnations and looks to continue evolving in upcoming months. The troupe re-envisions the already ambitious compositions of AAPA, casting them as country songs or tribal “Afra-beat” numbers.

Tonight, the Arkestra will join the hard-rocking local duo known as Jabberjosh to perform an early “drum line” show at the Eighth Street Taproom — an experiment spurred on by the absence of a couple members. Check out our podcast preview of the event.

Tonight, the lucky lucky crowned the inaugural "Miss Gaslight" will receive a $500 cash prize. In addition to the babes, onlookers will also enjoy live music, games, and more.

This singer/songwriter from Georgia melds country, rock and folk into open-toed acoustic tracks that channel his influences: Shawn Mullins, Dave Matthews, Rob Thomas, Darius Rucker and Sister Hazel to name a few. If the above names grease your gizzards, you'll probably be on board Smith's rockboat — if not, steer starboard. 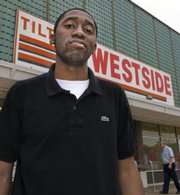 Lawrence’s reputation as a transient music community overlooks the dedication of dudes like Johnny Quest. The 29-year-old DJ, producer and emcee has been a vital cog in the local hip-hop machine since he was old enough to get X’s on his hands. He’s hosted KJHK Wax Clashes – somewhat famously and drunkenly—and freestyled his way to victory at emcee battles. As a producer, he’s worked with mic rippers like Approach, ID, Reach and Joe Good and left his indelible analog smoke all over their tracks.

Charisma and ingenuity have been Stik Figa's ace-in-the-hole since his days battle-rapping in the Topeka High cafeteria. With a no-coast style that's equally enamored with the crescent-fresh mainstream (Kanye West, Lupe Fiasco, T.I.) and the booty-shaking fringe (Cool Kids, Santogold), Figa is Southerner by blood and a Midwesterner by choice. As Stik Figa puts it: "I'm very well-rounded for being a square." Tonight, Stik will perform cuts from his new disc "Mental Liberation."

The Soul Clap with Scenebooster and DJ MAKossa

Extract
"Office Space" creator Mike Judge gets back to the daily grind with "Extract," but this time he tells wacky working tales from the boss' point of view: that of Jason Bateman's owner of a flavor extract factory. Unfortunately, Judge's characters are so one-note and their misadventures so ridiculous that it's hard to get attached to them. **
View showtimes