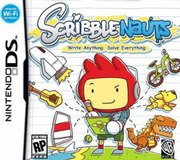 Scribblenauts may well be the most hyped game of the year. Before E3, you would have been met with a lot of blank faces when asking about Scribblenauts (a game, incidentally, codesigned by Lawrencian and former lawrence.com game reviewer, Matt Cox). What a difference a few days can make.

Practically every recap of the premier gaming conference centered around a breathless account of the little word game. After playing through the majority of the game, I understand why journalists were so excited about it. However, the game is not without it's flaws, both minor and opinion shifting. Here's a quick look…

Scribblenauts is a game about Maxwell, an adventurer who dresses like a space rooster with a penchant for collecting shiny “Starites.” That's the story. The end.

The way that Maxwell goes about collecting these precious objects is novel, and is in itself the real game. When faced with a challenge you simply type in what you need to resolve that task. It has to be a noun, singular or collective, but cannot be a proper name or risqué in any manner.

For example, say you come across a wide gap you can't quite jump over. A trampoline could be summoned to help you leap over and collect that precious quarry.

Or a jet pack.

Or a Soviet MiG.

Or a flying saucer.

Or you could grow wings.

And this is where the game grows from a simple puzzle game into one of the most genuinely “sandbox” experiences I've ever had the pleasure of playing. There are over 22,000 items you can use in the game, a number that is staggering when you see some of the things you can generate.

Also, each living creature has built in behaviors, likes and dislikes, enemies and friends. At my house, Scribblenauts has become the settler of all “Who'd win in a fight?” arguments. Zombie vs. Vampire, God vs. the Devil, Republican vs. Democrat...I haven't been stumped yet (However, the result of the “Vampire vs. God” fight was surprising).

The title screen in itself acts like an arena for these experiments. My first time playing I literally played the title screen for 30 minutes before realizing it wasn't the game, just throwing out words and hoping that the game would let me progress eventually.

On all of these challenges, you are rewarded with miniature achievements, based on how creatively or quickly you found the solution. Other fringe rewards come and go, like for sharing tools with others, or rescuing, or for being particularly violent or peaceful. One of my personal favorites, in any level that had a hippie in it, the challenge was not harming any living thing. These little curve balls make the play very satisfying, and the rewards you get (in-game money called “Ollars,” allowing you to buy more challenges) are immediate and seem appropriate.

It's not a game without flaws, though.

There is absolutely no story. In this generation of games, that feels needlessly lacking. The fun you have playing the challenges should be enough to motivate you throughout the game, but at points I found myself feeling tired of it. Especially when you find a few really powerful words to use. I find myself using maybe five words over and over again to solve just about anything. (Telling you those five words would be a bit of a spoiler, so I won’t.)

Also, the controls are annoying. For some reason, the developers decided to make the directional pad and the action buttons do the same thing: move the camera around the level. All on screen action is controlled through the stylus, both character movement and item use. I don't understand the compulsion game makers have to do this. What's wrong with letting the pad move the character, instead of poking the screen wildly and hoping the game figures out what thing you want to act upon?

The controls are absolutely atrocious on the vast majority of items. It's not game breaking, but it's irritating, and worse, reflected in your challenge results.

It could be argued that Scribblenauts isn’t even really a video game, as much as any newspaper word puzzle could be considered one. However, it’s undeniable that Scribblenauts is a riveting plaything, a fantastic toy in a time where we don't get many chances at good clean fun. That's a great thing in this era of games, and surely a reason that so many journalists were hyperbolic about it after E3.

It's not a perfect showing by far, but its adorable style, humorous user-generated scenarios, and brain straining puzzles certainly make it stand out as one of this years “must buy” DS games.

And codesigner Matt Cox? He's since left the video game industry to start a church in Lawrence — go figure.