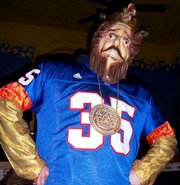 University of Kansas football and basketball teams are in hot water for getting into repeated fights with one another last week. Is this some sort of long standing rivalry or turf battle within the athletic department boiling to the surface? Kind of like the State Department vs. the Pentagon or vampires vs. werewolves? Do KU basketball and football players historically hate each other?

Sarah: “I honestly have no idea. I was never in with the über jocks while I was at KU, and none of my friends were jersey chasers, so I'm totally ignorant of any ongoing beef among the weight-room folks. Really, what would they carry a grudge about? One side is freakishly tall and runs around indoors in shorts, and the other side is built like refrigerators and runs around outdoors with a bunch of crap on. All of them are getting a great deal on tuition. What's there to fight about? Oh yeah, GIRLS.”

Jed: “Seriously, everything that I'm hearing is 'unconfirmed,' but it sounds like there's been tension for some time. I wouldn't call it a feud, but I bet Sarah would—especially after I dislocated her thumb. Post THAT on your Facebook, punk!”

Do you believe the reports this conflict, like all great conflicts, was sparked by a dame? Excuse me, that was sexist—sparked by a broad?

Sarah: “Ah yes, the ‘Helen of Troy’ theory. Wouldn't surprise me in the slightest.”

Jed: “That would make the most sense to me. I blame Sarah. I also heard unconfirmed reports that witnesses saw Willie the Wildcat and Truman the Tiger fleeing the scene of all 3 fights. I think that if you put out an APB on those two, you'd find them hiding out in Jack Harry's garage.”

Which movie do you imagine these rumbles most resembled: "West Side Story," "300," or "Brokeback Mountain"?

Jed: “My first thought was ‘Necessary Roughness.’ We need Sinbad to step in and set everything straight.”

Better symbol for the death of civility: Joe "You Lie" Wilson or Tyshawn "Dislocated Finger" Taylor?

Sarah: “I think civility died in the 80's along with the BetaMax.”

Jed: “Civility died when Glenn Beck got a job and people started mistaking him for a human being with valid opinions. To quote the late Bill Hicks, every word that comes out of his mouth ‘is like a turd falling into my drink.’ That was slightly…”

Kanye: “Yo, Jed! I’m really happy for you and I’mma let you finnish, but Sarah had one of the greatest responses of all time. OF ALL TIME!”

Does the dislocated finger explain Taylor's incoherrent Facebook postings on the subject? Maybe he had difficulty typing? What lessons can we learn from this incident about social media and being an idiot?

Sarah: “I don't belong to the Facebooks, so I can't say I saw his postings. I can never understand what the darn kids say nowadays anyway—it's all a bunch of jibber jabber.”

Jed: “His Facebook postings really are a head-scratcher, which is a good thing since he does not need that thumb to scratch his head. Generally you opt for the fingers for that exercise. I think the lesson we can all learn is that Facebook postings are only good for making a fool of yourself. If you have something to say and you hesitate for a second and think, ‘Hey, that might not be a good idea’—DON'T. Hit 'Cancel' and go back to work. Facebook is wonderful for getting in touch with people over long distances, and especially after long periods of time. I don't think that it's a good place to vent or discuss where you're going and what you're doing at all times of the day. They should come up with a separate site for that ‘iDiary,’ and make it as secure as Fort Knox—kind of an anti-networking site.”

Finally, and more important than the reputation of our community or notions of human decency, will this impact the Jayhawks' athletic season? Predictions?

Sarah: “My prediction this year is that our basketball team will be ridiculously talented, but may struggle at first to get all the talent to work together. There will be a lot of competition for 3 of the starter slots—i.e. for those who are not Cole or Sherron. Come January, I bet we will sweep the Big 12 with the possible exception of Texas, who always gives us a hard time. I haven't seen enough of the other top 25 teams' lineups to predict how we'll fare in the tournament, but at least bloody Tyler Hansbrough is gone now.”

Jed: “It will only impact the season if we let it. The official letter from the team captains, although appreciated, was a pretty lame idea. I'm glad that Taylor and Co. actually met with the media. Whatever needs to be done to ease whatever tensions we have will certainly be done by both coaching staffs. I have complete trust in them. It's nowhere near as bad as Chalupa-gate, Moonbar-gate, or CJ Giles-gate, but it's a very unique story that will linger in the media for longer than anyone around here would like. These guys are going to be tested for quite some time on this and any slip-up would probably result in severe repercussions.

Predictions? I'm going with Big 12 North champions and Holiday Bowl for football, and another Big 12 championship and Final 4 berth for basketball. There's a ton of pressure on both programs to perform this year. I think some will be disappointed in these results, but I'd be ecstatic. Rock Chalk!”

i'm more than happy to put the blame on an anonymous female. (ho-bag)

Hee hee. Chalupa-gate. Forgot about that one.

At least no one got stabbed this time. Lookin' at you, Giddens!