Dan Glickman resigned his post this week as chairman of the Motion Picture Association of America after a six-year stint. The Kansas native took over Thursday as president of Refugees International. 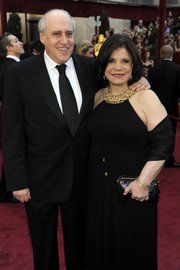 Dan Glickman and his wife, Rhoda, arrive at the 82nd Academy Awards in March in Los Angeles.

Dan Glickman spent much of the last decade fighting pirates in Hollywood. But he did it from an office in Washington, D.C.

As head of the Motion Picture Association of America, the Wichita native got to mix his lifelong love of movies with his political savvy. During his tenure, the 65-year-old Glickman steered the MPAA toward its goals of safeguarding intellectual property, reducing trade barriers and upgrading its omnipresent ratings system.

“(The movie industry) is a huge export item and job creator in this country. It’s one of the only industries where we consistently export more than we import,” he says.

Yesterday Glickman left the MPAA, where he had been chairman and CEO since 2004. (MPAA president and chief operating officer Bob Pisano will serve in the interim while the organization searches for a replacement.)

Glickman now takes over as president of the humanitarian group Refugees International — a job that puts him in a position to come face to face with actual pirates.

Q: When we originally spoke six years ago, you mentioned your first priority would be to tackle piracy. How do you think you did?

A: I think we did good considering the complexity of the problem. The original problem was piracy on the street. I think we’ve done well there. Internet piracy, online piracy is far more complicated. It is a constant battle. It’s ubiquitous. It’s very high-profit. It’s further complicated by the fact that an awful lot of people think that if something is on their computer, it’s theirs.

Q: What’s the most common misconception about movie piracy?

A: This stuff is not free. Our biggest challenge is to educate the public, particularly younger people, that this stuff is the product of the creator, who worked very hard and deserves to be compensated. But we also have to provide the product to the consumer in hassle-free, reasonably priced ways. I’m not sure that was the case five or 10 years ago. But now you can get all sorts of stuff streamed to your TV set and legally downloaded to your computer.

Q: What was your biggest success at the MPAA?

A: Lots of legislative successes at the state level, federal level and internationally. All dealt either with tax issues or piracy issues. But the thing we’re most known for is our movie ratings system. We rate virtually all movies that are shown commercially in this country, and then we approve advertising — last year it was about 60,000 ads associated with movies that were rated. The purpose of that system is to give parents information they can use to properly educate their kids. We added smoking, for example, as a factor in the rating of movies in the last few years.

Q: Did the documentary “This Film Is Not Yet Rated” have any sway on your policy making?

A: That was a documentary that was an advocacy piece that had some impact. Some of it was unfair. Most documentaries, in order to get attention, are more of the “man bites dog” rather than “dog bites man” scenario. What it did for me is it caused me to develop better relationships with the independent film movement, who felt they were a bit neglected in the ratings process.

Q: Was there a rating that the MPAA gave to a movie that you eventually regretted?

A: Yes, but I’m not going to tell you what it is. Let me put it this way: There’s a group out there who do the ratings, and they have a very tough job. They see hundreds of a movies a year, and they have to look at them and say, “What would an average parent think?” I’d say 98 percent I agreed with the rating. A couple I didn’t. That’s a pretty good average.

Q: This one in particular, did you disagree that it rated too strong or not rated strong enough?

Q: Why did you decide to leave the MPAA?

A: I spent 25 years in public service, as a Kansas congressman and as secretary of agriculture (under Clinton). I wanted to go back into some form of public service. I’ve been itching to do that for some time. I was looking around at what was available, and it struck me the nonprofit world was the place I could influence more than anyplace else. Refugees International is the largest and most significant of the non-governmental organizations advocating for displaced persons worldwide, whether it’s caused by national disasters or political crises or war. It’s a good confluence of being involved in the world and to help reduce conflict in the process.

Q: What will the Refugees International job entail?

A: We don’t deliver resources on the ground, like food or water. What we do is we go in and analyze what’s happening, whether it’s in Haiti or Darfur or the Congo or Burma. Then we come back and lobby governments for needing more resources or money to step up their efforts against, say, mistreatment of women. We just went back to Haiti and found the United Nations was not properly organized to deal with the crisis there, so we made some suggestions. We send out almost like international SWAT teams. I’ll go on some of these missions myself, then we’ll come back and make substantive suggestions. But we do not take any money from the U.S. government or United Nations or any foreign government, because we want to be unencumbered by that kind of relationship.

Q: Are the missions potentially dangerous?

A: Potentially. I’m not going to the highest-income areas of Western Europe. I’m going to places where there is conflict. But they’ve done these repeatedly, so they have good security people who are helping out. I’ll be careful.

Q: What’s the best movie you saw that was released during your tenure at the MPAA?

A: I’ve seen a lot of movies. I saw a lot of great documentaries. I’m trying to think back. You know, I liked the movies this year that were in the awards season better than I liked them last year. I liked “Avatar,” “Inglourious Basterds” and “The Hurt Locker” better than movies like “There Will Be Blood” and “No Country for Old Men.” I thought they were more uplifting than anything. But I didn’t have a favorite movie. I’ve got some old movies that are my favorites, like “Godfather” and “Godfather II,” “The Shawshank Redemption,” “Animal House” — that last one may seem strange, but it was like my life in the ’60s.

Q: Which “Animal House” character were you?