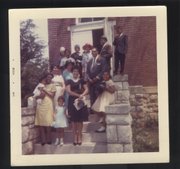 Blue-jean clad churchgoers at the EastLake Community Church, 2040 W. 31st St., enjoy coffee and pastries after the service on March 21.

Dorothy Harvey remembers when it wasn’t Sunday without a hat, long white gloves and the most beautiful dress in the closet. Every Sunday meant dressing to the nines, even if it meant sitting in a packed, sweltering church long before the days of air conditioning.

“You always dressed to look your best. That was the whole point,” says Harvey, 84, who plans on wearing a nice dress to Easter service Sunday at St. Luke African Methodist Episcopal Church, 900 N.Y. “It was just something that was just drilled into us.”

To this day Harvey says she won’t ever wear pants in St. Luke’s sanctuary. She might wear slacks in the church’s lower-level fellowship hall, but that’s as dressed-down as she says she’d ever feel at the church she’s attended for 60 years.

Meanwhile, across town at EastLake Community Church’s service at South Junior High School, pastor Matt Cox says it would be unusual if anyone came dressed up to his Easter service, despite the fact that Sunday’s holiday is one of the dressiest on the Christian calendar. Therefore, it may come as no surprise that the church is billing Sunday’s service as “A different kind of Easter: casual atmosphere, fun for kids, short service, no weird stuff.”

“As far as EastLake is concerned, we’re all about trying to remove as many roadblocks as possible for people just to show up,” says Cox, who preaches to about 200 jeans-wearing worshippers each week. “And clothing is just one of the many, many things that I believe that the church, over the years, has just put in the way of just getting people to hear about God.”

So, when did wearing your Sunday best turn into dressing like all the rest? And do the clothes really make the man, woman or worshipper? Several people we talked to pinpointed the post-Vietnam world as the beginning of the end for the hats-and-gloves era of churchgoing, including Joe Flannery, who provides a unique perspective.

Flannery grew up in the Catholic Church, attending St. John the Evangelist as a child, and saw the slide from über-dressy to everyday casual both from his pew at the St. Lawrence Campus Catholic Center, 1631 Crescent Road, and as the president of Weaver’s Department Store, 901 Mass.

“My mother always dressed the three of us — I had two brothers and myself, every Easter. It was a fun day, we dressed up and went to church. It was back in the mid-’50s, and we all had coats and ties,” says Flannery, 59. “It was just different times. People generally dressed up for Sunday church, no matter what day it was, but Easter was held in higher esteem.”

Flannery says that he began to notice in the 1980s that men’s sportswear — sweaters, shirts, khakis, separates — began to become more of a force in the fashion world and soon took over worship wear, as well. Denim jeans were quick to follow.

“I think society has just become more casual. And as a result, not only in churches, but you notice it in restaurants — just about everywhere you go, people wear anything today,” Flannery says. “And there’s no standard dress, per se.”

Pastors acknowledge that the spectrum of clothing that shows up in their congregations can sometimes be a source of stress for members of the congregation who grew up in the hats-and-gloves era.

“We don’t have a code that we as a congregation set forward or anything, and certainly sometimes it creates a little ... irritation on the part of some, when ... some members as individuals don’t approve or think something is a bit too casual,” says the Rev. Gary Teske, pastor at Trinity Lutheran Church, 1245 N.H. “Personally, I’m just delighted to see people at worship, and the vast majority of our congregation is the same way.”

And that’s the key, says the Rev. Terry Newell, pastor of Perry’s Crossroads Cowboy Church: Having the bodies of believers in the pews is more important to many in the church than keeping score on each individual’s definition of “Sunday best.”

“I believe somebody asked me that question once before: ‘What about God wanting our best on Sundays?’” Newell says. “And I said, ‘Well, I think God wants our best — what’s inside us — all week long, not just on Sunday mornings.”