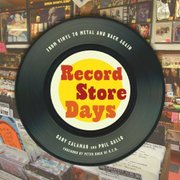 Los Angeles — Picture a time when new technologies are threatening the livelihood of performing musicians. Music business titans are scrambling to adapt to the decentralization of distribution. Skeptics say it was all better back when music was an intimate transaction between artist and fan, instead of a fleeting bit of consumption.

The year is 1924. The new technology is the vinyl album, and the new retail concept — as seen by one particular forward-thinking San Francisco piano dealer — is the record store.

“That was a time when people thought records were really bad for musicians,” said Gary Calamar, the co-author of “Record Store Days: From Vinyl to Digital and Back Again,” a new history of (and unashamedly geeky paean to) the culture of the record store. “People were just getting used to electricity, and many artists resented the presence of records. They thought nobody would buy sheet music anymore.”

The sentiment will feel uncannily modern to anyone who has downloaded a torrent file or seen a pink slip from a major label. In “Record Store Days,” Calamar and Phil Gallo document a unique retail culture, one in which so many American teenagers learned what “cool” looked and sounded like. The writers also detail the long history of the music marketplace to show how today’s Wild West business climate is far from unprecedented.

Calamar, a KCRW-FM host and music supervisor for television shows such as HBO’s “Six Feet Under” and “True Blood,” is versed in both the past and future of selling music. A veteran of L.A. stores such as Rhino Records and Moby Disc in the 1970s and ’80s, he also helped shepherd in an era in which a key TV placement meant as much or more to an artist’s bottom line than a record deal. But his allegiance to the idea of the physical store is palpable — a recent half-hour visit to Freakbeat Records in Sherman Oaks with him and Gallo quickly turned into an entire afternoon there.

“Record Store Days” isn’t a memoir, but it is charged with the sense that a record store is an unusual convergence of capitalism and counterculture, one that deeply shaped who Calamar and Gallo (a music journalist who has contributed to the Los Angeles Times and Variety) are today.

“To this day, the first stop I make in any new town is to the weird local record store,” Calamar said. “It’s how I get my bearings. I wanted to document that as it was disappearing.”

That contemporary sense of doom, however, is largely a bookend to the plucky midcentury optimism of much of “Record Store Days.” The book makes an implicit case that the rise of the record store mirrors the advent of American pop culture.

In the early 20th century, record stores were often isolated outposts of regional or ethnic music, or retail outlets using 78s as promotional items to sell new and more-profitable home electronics. But with the rise of teen culture in the 1950s and rock music in the 1960s, record stores became the front line for youthful rebellion. Buying each Tuesday’s new releases under the glare of a long-haired, oft-stoned store clerk was an initiation rite into adolescence — and the complexities of American identity.

“I’d go to stores as a kid and hear whole sides of New York Dolls albums and see album covers of these guys in lipstick and dresses,” Gallo said. “That was amazing to me. Then I’d hear a nine-minute funk song from Baltimore that would tell you so much about a particular place and time.”

Los Angeles stores, such as the leviathan Amoeba Music in Hollywood, play a central role in the book, as the city is the home of the major-label infrastructure and many of the most influential record stores. The history of music commerce in L.A. tells a much larger story about life and culture in Southern California.

In the 1950s, South L.A.’s wittily named R&B outlet Dolphin’s of Hollywood, for instance, was subject to racially segregated zoning policies. But the store’s existence also demonstrated owner John Dolphin’s business acumen, where an in-house radio station, record label and close relationship with nearby factory workers (the store stayed open 24/7 to accommodate late shifts) foreshadowed the flexibility and community-mindedness that today’s stores — such as Origami Vinyl and Vacation — need to survive.

“For a lot of kids today, this is their first experience in an actual record store,” says Origami owner Neil Schield, whose thriving vinyl-only store on Sunset Boulevard just celebrated its one-year anniversary. “But then dudes in their 50s will say, ’Whoa, this reminds me of the ’70s.’ It’s a retro way of thinking, but stores don’t think like this anymore — we want to be fully integrated in the neighborhood.”

“Record Store Days” is also a story of corporate capitalism’s perks and perils, documenting the rise and fall of mega-chain retailers such as Tower and their major label partners, whose neglect of independent stores cut off a major artery of word-of-mouth fan support. On one level, Calamar sees his role as a music supervisor as something akin to that of the surly store clerk of his youth — a trusted intermediary between a morass of music and a curious fan. But as 2009’s biggest story in music proved, television and the Internet might not be enough to fill that gap. Sometimes fans need a place to go.

“Michael Jackson was the first major death of a musician where people didn’t have record stores,” Gallo said.

Calamar agreed. He shook his head at the thought. “I worked in Licorice Pizza when John Lennon was killed,” he said. “I had the day off but I came in anyway because people needed a place to mourn.”

What the hell is this? We have two excellent independent local record stores literally right across the street from each other, 2 blocks from the LJW headquarters, but nobody can be troubled to write anything? Did you cut and paste this article off of the internets? Lame.

Its an LA Times piece.

Its good to know that "Epic Nervous Breakdown After Energy Drink Prank" happened and is on the internet.