Bill Goffrier of The Embarrassment (early all ages patio show) 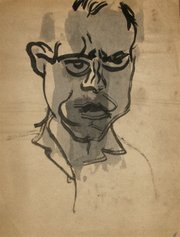 It's been three decades since Bill Goffrier staged an art show in Kansas.

Of course, that depends on your concept of "art" and "show."

For years Goffrier and his Wichita-based band, The Embarrassment, merged art and music into a hammering, hummable collage. Characterized by their short hair, thick glasses and art-school pedigree, his bandmates thrived from the late 1970s through the early '80s as the most esteemed underground rock act in Kansas.

"If you add up being a starving artist and a starving musician, you got some real good earnings there," Goffrier jokes.

Yet Goffrier has managed to forge a career in each field. First in music with The Embarrassment and the Boston-based indie rock group Big Dipper (from 1985-1990). And later as an art instructor in the South Shore area of Massachusetts, where he currently resides.

"I'm more schooled in visual art and knew more about what the craft was supposed to be," Goffrier says. "So I would apply things from visual art to music: making a statement, using a medium, keeping it simple and direct. Even with our punk-rock songwriting, I needed some set of guidelines, some structure."

This weekend Goffrier will have a chance to display both talents. He'll perform a solo set today from 6 p.m. to 9 p.m. at The Replay Lounge, 946 Mass. On Saturday, he'll host an art opening for his work from noon to 2 p.m. at Ichiban Tattoo Studio, 1912 Mass.

"I have no tattoos yet. I've never been that tempted. Would this be the time to get one?," he asks.

"The first thing I think of with tattoos is skin. And I have a lot of artwork that shows a lot of skin that I've not usually been able to exhibit. I thought this place would appreciate skin."

From Massachusetts to Mass. St.

Goffrier will present 21 "works on paper." These include watercolors, brush and ink, charcoal, pastel and monotype prints. Many of the pieces are band-related images.

"I originally contracted him in '98 about doing (a Lawrence music scene) reunion and somehow then was introduced to his artwork," says "Sunshine" Leslie Dunham, business manager and co-owner of Ichiban.

"I originally was surprised by his versatility. I really like the line element that he uses in his charcoal drawings. He is also great at landscape painting, although he is not showing those this time around."

The 52-year-old Goffrier graduated Wichita State University in 1980 with an art degree. Following his Embarrassment tenure, he went on to earn an MFA at Boston University.

"I was into both art and music as far back as I can remember. I remember in third grade I loved to draw, and I was also taking guitar lessons. In school, it was a lot easier to pursue visual art than guitar. In high school that became predominant," he says.

"Some of their parents are people who used to come to the clubs and see Big Dipper," he says. "We talk about those old times. But the kids are more into The Beatles."

Blast from the past

In Kansas, however, generations continue to warmly idolize The Embarrassment.

"Whatever longevity we have is due, thankfully, to some of the songs having integrity," says Goffrier, whose signature tunes include "Drive Me to the Park," "Celebrity Art Party," "Sex Drive" and "Elizabeth Montgomery's Face."

The guitarist says he feels grateful for the support the band maintains. (A 2006 reunion led to sell-out shows in Lawrence and Wichita.)

"I'm sure for a lot of people it's a nostalgia thing. But every once in a while I hear from people who are new to the band," he says. "The music doesn't sound dated; it sounds like something they can enjoy now. That is quite a compliment because it's hard for me to imagine feeling that way. If you set the 'wayback machine' to when we were in that band, if we were trying to look back 30 years, we wouldn't have appreciated much of anything beyond Buddy Holly."

Fans attending the Replay gig can expect to hear a mix of familiar tunes and fresh material.

He says, "I've been writing a lot of songs for Big Dipper because we're working on a new CD. But we have three pretty prolific songwriters, so there's a lot of material to pick and choose from. Sometimes I'll say about a song I've got, 'This would be good for Big Dipper, but this one, clearly not.'"

Goffrier claims to have a standing offer to release a solo CD, and much of his recent material will likely find its way onto this project. (He actually contributed the album art for 2008's "Supercluster: The Big Dipper Anthology," so expect to see more of his paintings if the solo disc emerges.)

"I've got a lot of stuff I can play, but if people mostly want to hear Embarrassment songs, I can do at least 10 of them," he says. "And, hopefully, they don't all sound the same. Do you have any requests?"