Around the clock: Flex-plan policies developing as win-win scheduling for companies, employees

Miguel Luevano is the deli counter manager at Community Mercantile, 901 Iowa. He says he enjoys the benefits of flex time. 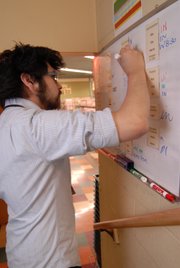 A white board at the Community Mercantile helps staff keep track of those employees who are away on flex time.

When it started in 1951, Hoss & Brown Engineers operated much like most other businesses did at that time — employees worked from 9 a.m. to 5 p.m., five days a week. And maybe then some.

For 45 years, that worked just fine for the Lawrence firm. But the industry was changing, says H&B’s Jo Ann Williams, and so their firm would have to change, too.

“At times, employees will need to work over long hours to meet deadlines,” Williams says. So to compensate for that, seven years ago H&B instituted a flex-time policy allowing employees to make up for lost personal time when the work cycle allowed.

“We first started offering Friday afternoons off — four nine-hour days and half-day Friday — and over the years the policy has become more and more flexible to allow both the company and the employees to benefit from it.”

How the employees benefit is pretty straightforward.

“Flex time has allowed employees to schedule doctor’s appointments, take kids to school, pick kids up from school,” she says. “I believe that it has actually helped the morale because they don’t feel the pressures of having to make the decisions between family and work.”

How a company benefits from flex time may not be as apparent, but it most certainly does, Williams says. She attributes H&B’s very low turnover rate to the company’s flexible work environment, and she says employees end up working more than they would under a strict 9-to-5 schedule.

“I think they end up working more hours because they are more satisfied with their work environment,” she says. “Having the ability to handle family or personal issues without worrying about their job seems to make them more willing to work extra hours whenever the work requires it.”

When both the company and the employee benefit from flex time, it’s little wonder it’s becoming a thing of the future, says Lawrence-based HR consultant Ryann Pem.

“Flex time has been around for a while, but I’m seeing it more and more,” she says.

“With Generation X and Yers it’s a really big thing because unlike the baby boomers, you have people working today where time is more precious to them than money. Their time off means a lot. So in exchange for working a longer workweek hour-wise, but being able to flex their schedules, that’s something that really benefits those Generation X and Yers,” Pem says.

That’s certainly the case for Miguel Luevano, a 26-year-old who works at Community Mercantile, 901 Iowa.

“When I’m working the counter, it can be hard to fill my time. You always have to make sure you have a project to do, like working on a new coffee menu or something,” Luevano says.

On the other days, he’s busy all of the time, but he’s also not chained to one place. Ordering, errands, supervising the deli, some desk work...

“There’s always last-minute changes or situations that require my schedule to change, so I always just roll with it,” Luevano says.

He says he likely works more hours on the flexible schedule, but it’s a trade-off he prefers.

“Having a flexible schedule makes it easier to take random days off,” he says, as well as attend to personal things when they come up midday.

About 30 percent of full-time workers in the U.S. currently have flexible schedules of some sort, according to the U.S. Census Bureau.

Pem says she frequently consults with employers who are still on traditional schedules about the pros and cons of implementing some degree of flex time.

“Employers have explored new hour configurations, such as flex time, not only out of compassion for workers’ personal lives alone. Some companies that implemented these programs realized productivity gains and better employee retention rates … while others adopted them as incentives to lure skilled workers in high-demand occupations,” Pem says.

Productivity gains frequently come from turning a clock-watching employee into one who cranks through work to potentially free up time later.

“A lot of employers have found that by using flexible schedules their employees are working more hours early in the week,” Pem says. “When employees work more hours in the beginning of a workweek … because it’s not Friday, they’re not thinking about the weekend. They’re thinking about the job they need to get done during the work week.”