Downtown door to nowhere reveals layers of town's past

The mysterious bricked-in door and window in the basement of historic Miller's Hall, now home to Goldmakers Fine Jewelry and Nomad's at 723 and 725 Mass. St.

Peter Zacharias, owner of Goldmakers Fine Jewelry which is located in historic Miller’s Hall. Zacharias is sitting with some of the artifacts he's found in the building and elsewhere in Kansas — as well as a whiskey jug that he believes belonged to Larkin Skaggs, the only one of Quantrill's men to be killed during the raid on Lawrence in 1863. Zacharias found the whiskey jug near the tree behind him in this photo while excavating 25 years ago to improve his back yard's drainage. Listen to the audio clip below to hear the full story behind why he believes this jug belonged to Skaggs.

Like a window or door sealed with brick, some views into the past are impenetrable.

So it seems to be with, well, a window and door filled in with brick in the basement of Goldmakers Fine Jewelry. It's certainly a bizarre scene on the east side of the basement at 723 Mass.

If the door were to lead anywhere now, it would be into a subterranean space under Massachusetts Street. But where it once led 155 years ago when the building was constructed is a mystery.

Owner Peter Zacharias has been in the building since 1969, so he's had plenty of time to try to solve the mystery. Still, he's only got a couple best-guess theories.

When asked what purpose he thinks the window and door served, he first launches into a lengthy, captivating story...

"So Lawrence is burned three times — Quantrill was just the last one," says Zacharias, who's read some dozen books on the Bleeding Kansas era, circa the 1850s.

"Anyway, they decide to ... build giant earthwork forts downtown. The biggest one was here in front of the Eldridge. It's like a 12-foot doughnut. And they put their artillery in that. Right in the middle of the intersection. They built several of them, and from then on they were on constant alert."

Until the Battle of Little Blue River, he says. A planned raid on Lawrence was cut short Oct. 21, 1864, near Independence, Mo., and Confederate Maj. Gen. Sterling Price was defeated — ending major confederate involvement in Missouri.

"That's when Lawrence finally knows it's safe. After that they take these giant earthwork forts and just level them out and fill in the streets," Zacharias says.

Zacharias also says that the books he's read about the era — like Richard Cordley's 1895 narrative, "A History of Lawrence, Kansas" (the entire book is available free via Google) — mention using soil dredged from the Kansas River to level out downtown and the area of the modern-day train park.

Whether all that soil was enough to raise the street level a full story — and so bury the old first floor of existing buildings — is doubtful, though, says Steve Jansen, former curator of the Watkins Community Museum of History.

"There's at least indirect evidence of a significant amount of fill that's been brought in to raise the street level," Jansen says.

"But it's hard to imagine that with the tools they had available to dredge the river that it would be enough material to raise the level (8 or 9 feet)," he says. But "since they didn't start doing infrastructure systematically until the 1880s or '90s at the earliest, I don't know how one would confirm that."

Another, compatible theory Zacharias has about the door is also connected to the pro-slavery raiders from Missouri.

Photo courtesy the City of Lawrence

This photo shows a substantial amount of limestone and brick infill underneath a crosswalk on the 600 block of Massachusetts Street. In April 2005, the city excavated downtown streets to repair a water line. 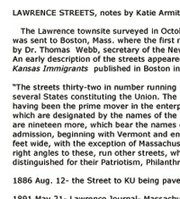 "There were boardwalks out in front of many of the buildings," he says. "During the various raids on Lawrence, people built up the dirt in front of the boardwalks so they'd have a place to hide. Lots of people hid under those things during Quantrill's Raid. And Quantrill's guys would shoot right through the boards, thinking there were people under there."

Zacharias imagines that the boardwalk in front of his building had a passageway underneath it, perhaps with stairs that were obscured by the boardwalk.

"In one of these buildings — and I think probably this one — there was a subterranean cavern underneath the boardwalk, and that's where they hid the cannon during the first Lawrence raid," Zacharias says.

It's a plausible theory, since Zacharias' building is the historic Miller's Hall. Before Kansas became a state in 1861, Miller's Hall served as the Free State capitol building of the territory. The Free State Party offices were on the second floor and the Free State legislature was on the third floor. That's where Zacharias says abolitionist John Brown gave his 'Shirt of Blood' speech, which included a variation on his infamous line:

"The crimes of this guilty land will never be purged away but with blood."

Today, Miller's Hall is on the National Register of Historic Places. But given its rich history, it took far more time and persistence to get it listed than it maybe should have.

Zacharias says the Kansas Historical Society originally denied his application because the building had changed significantly since it was built.

A map of Lawrence in 1859. Note: this map was drawn while some buildings depicted were still being planned — but ultimately were never constructed.

An 1868 photo looking north down Massachusetts Street from present-day Eighth Street. Liberty Hall is the last tall building on the right side of the street near the center of the photo.

"Even though it's probably the oldest building in town and survived Quantrill's raid, the state said that since it had been repaired after the raid it wasn't the historic building that it was during the raid," he laughs.

Zacharias and his friend John Lee would spend the next few years building a case for Miller's Hall, compiling history and photos of the building — and they eventually won out in 1985.

They then approached other downtown building owners and pitched them the benefits of getting their property listed, too. Three years ago, after some 20 years of working with dozens of Lawrencians, enough buildings were registered to designate the entire downtown area a National Historic Place.

It was a lot of work, but Zacharias knew how critical it was, and he had a firsthand story to tell to skeptics.

"Our family came to America — Dodge City — from Hamburg, Germany. I was 3 and caught up in the whole Davy Crockett thing," Zacharias says. "We all worked at Boot Hill ... it was great."

But by the time he was 20 years old, the historic Boot Hill would fall victim to a developer looking to get a piece of the government's Urban Renewal grants. Two blocks of turn-of-the-century buildings were leveled to build a recreation of the set from "Gunsmoke" and a huge parking lot.

"They were the two most historic blocks in town," Zacharias says. "It's one of the biggest historical travesties you'll ever see. That's what gets me hooked — I just cannot believe they were allowed to do that.

"They just tore the life out of the city, and for no good reason. That's exactly why I got involved here, in not letting the same thing happen to Lawrence, after seeing how easily it happened in Dodge."

Find comments from Lawrencians about this story on the LJW version: http://ljworld.com/millershall

I'm not masochistic enough to want to know what LJW commenters think about this, but thanks.