Josh Nathan works on the set of “Leverage” in Portland, Ore. Nathan is one of four Kansas University film students who spent the summer as production assistants for the TNT original series. 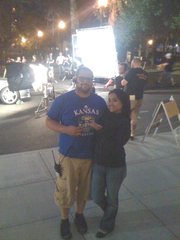 Gary Camp/Special to the Journal-World

Timothy Hutton is joined by guest star Elisabetta Canalis this season on an episode of “Leverage.”

What one learns in film school isn’t necessarily the most vital info when attempting to break into the Hollywood scene.

Fortunately, for Kansas University senior Josh Nathan, he’s found a way to explore the real-world aspects of the industry while still enrolled in the academic side.

But to get to the top, sometimes you need to start elsewhere.

“Most everybody who is at the top or in the middle begins as an unpaid production assistant. ... I had a pretty good idea what it would be like going into it. But I was surprised by the long days,” Nathan says.

“PAs are some of the first to get there and some of the last to leave. You work between 14 and 16 hours. You eventually get used to it. But the first couple days blew me out of the water. My feet were super sore.”

Nathan was one of four KU film students to spend this summer in Portland, Ore., toiling as interns/PAs on the third season of “Leverage.” The TNT original series follows the exploits of a crew of high-tech crooks (led by Timothy Hutton) that attempt to steal from wealthy criminals and corrupt businessmen in Robin Hood-esque fashion.

“I assist production in whatever they need done,” explains the 22-year-old Nathan, whose unpaid internship began June 1 and ends Sunday, coinciding with the wrap of the shooting season.

Typically, the students would handle everything from mundane chores such as taking breakfast orders to on-set duties of wrangling extras and escorting actors from base camp to the set.

The intern group — that also includes Sam Findlay, Scott Root and Jennifer Ashley — was recruited by Marc Roskin, an executive producer and director on the series. Roskin graduated from KU in 1990 with a degree in theater and film.

“What it really allows them to see is all the different entities that go into a TV show,” Roskin says.

“They’ve been utilized in so many departments. Sometimes they’re just helping lock in a street corner, sometimes they’re standing in for an actor. Other times I’ve seen them holding a boom or assisting the camera department. Occasionally, I’ll put them in front of the camera as FBI agents or cops.”

Roskin recalls the moment when his life as a production assistant reached its pinnacle.

After heading to Los Angeles years prior, he had worked his way through a variety of cinematic PA jobs (“Universal Soldier,” Stargate,” “The Lost World: Jurassic Park”) until he had become an assistant to filmmaker Roland Emmerich. It was 1998, and Emmerich was shooting his mega-budget remake of “Godzilla.”

Roskin then explained to Emmerich his inspiration that involved giving an actress different motivation when playing a scene.

“To see that idea be implemented was one of my greatest moments,” Roskin remembers.

The Northbrook, Ill., native originally came to KU in the mid-1980s to study film.

“I always thought when going there I might transfer to another school, but I fell in love with it,” he says.

Although the curriculum was devoted more to theory than hands-on production in that era, Roskin still considers his education invaluable.

“I had a really good time with the film and theater department,” says the 42-year-old producer. “And I started the KU Lacrosse Club, which is still up and running.”

This summer Roskin and his young colleagues have on occasion exchanged stories about Lawrence during their long days on the set of “Leverage.” (Executive producer Kearie Peak is also a past resident of the city.)

“There have been a few times when we talk about The Hawk or The Crossing,” he says. “But I was in Lawrence when we only really had a basketball team.”

Nathan ultimately got to spend quite a bit of professional time with Roskin. During a “Leverage” episode directed by Roskin, the student was able to act as his shadow.

“That was really interesting and a great learning experience,” Nathan says. “It’s a little different than one might think if they’ve only worked on a film school video.”

The intern says the shadowing allowed him to see the intricacies of what it takes to maneuver within a project typically staffed by 120 people.

“I learned the importance of understanding the jargon of a director,” says Nathan, who grew up in the small Kansas town of Moundridge.

“There’s an aesthetic part of working with actors and creating a shot, but you need to be able to talk to the DP (director of photography) and say what you want: a 50/50 shot or over-the-shoulder or whip left. Things like that are a little harder to get in film school.”

Fellow intern Jennifer Ashley says that despite the grueling days, she enjoyed the fact that it was “never a typical 9-to-5 job.”

“I hoped to gain the experience of what it’s like on a film set and see what it takes to make it into the industry,” says the 21-year-old Olathe native.

Nathan, who aspires to be a director, says the experience was invaluable.

“I’ve gained what I hoped to, which is understanding how a bigger budget film or television show works,” he says. “When you’re in film school, you don’t quite get it — I know I didn’t. It’s 20 departments or so coming together that have tons to do, but they get it done. You see how it works down from the producers to the heads of the departments. A lot of it is on the fly. ... I know when I came out here I was overwhelmed by the idea of making a feature film, but now I’m much less anxious about it due to the fact I’ve seen how it works, and how it is possible through planning.”

“There are no easy days on ‘Leverage,’” says Roskin, who also has produced the TV movie franchise “The Librarian” and the feature films “Flyboys,” “Cellular” and “Who Killed the Electric Car?”

“Every season our show has gotten a little harder because we’re trying to make it that much better. ... As soon as that seven days are up, the next one starts. It’s a constant machine.”