Odd jobs: In this economy, Lawrence residents are getting creative 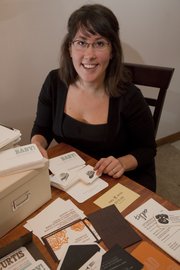 Designer Emmy Rice is a recent graduate from KU in web design but has been shut out in a tough job market. So she has taken a part time job at the library and created a card and announcement business using her design skills. 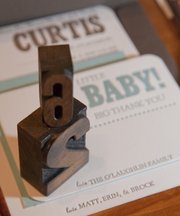 Frustrated by a dry job market, recent KSU graduate Emmy Rice has taken matters into her own hands, starting Typo, a card and announcement business. Rice likes to use old wooden block stamps in her design. 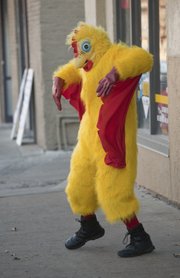 Danielle Moccia has been cobbling things together. The Kansas University senior has enough odd jobs to keep a juggler going for quite some time.

She’s a resident assistant in the dorms. She’s a life guard at Robinson Center Pool. And, in a move that’s allowed her to cross something off her bucket list, she’s a nude model in KU’s arts classes.

All that plus a few writing assignments here and there for the hopes-to-be journalist and a full slate of classes makes for one busy life. And she’s not alone.

“I would like to have a real job when I graduate,” says Moccia, who is studying journalism and Spanish. “I’m just kind of adding on new jobs. I swear, like every semester, I get a new job. I only work two or three hours here and there.”

Those are some scary numbers for anyone starting a career, as Emmy Rice knows full well. Ever since graduating with a master’s degree in graphic design from Kansas State in December 2008, Rice has been trying to find a job in Web or graphic design, but things haven’t panned out. With, her husband in law school at KU, Rice has had to settle for cobbling jobs together while still looking for the perfect position in her field. But she’s found a sure-fire way to stay active in her field of interest while going on job interviews and working part time at the Lawrence Public Library: starting her own business.

This fall, Rice created a letterpress invitations and announcements company called Typo. Started on a whim after friends commented on the announcements Rice made for her own wedding in August, Typo has become a way for Rice to do design on her own terms.

“Basically, after we got married, we got a lot of requests for invitations and brides [requested my work] and so I started to treat it professionally and make a business,” Rice says. “And so, I have a website, I have a whole pricing scale, I have an Etsy shop, and I have an environmental policy, because that was important to one of my brides, and so that makes me think it’ll be important to others.”

Rice is spending several hours a day perfecting designs for clients. She says that many weeks it’s basically a full-time job, especially because she’s become the official announcements vendor for Loose Mansion in Kansas City.

“Now this has kind of blown up,” she says, with a smile. “I spend probably too much time on all of them, but it’s fun.”

Also cobbling together a living is 19-year-old Zachary Cote. A recent transplant to Lawrence, he’s found work at Oh Boy! Chicken, 125 E. 10th St., work that most recently involved skipping up and down Massachusetts Street dressed as a giant chicken.

“The chicken suit, I knew about when it started, I didn’t know I would be in it up until yesterday,” he says, holding the yellow beaked head in his hands after gamely putting it on for his beloved boss, Nancy Nguyen. “I don’t know if she’s going to have me do this all the time, but if she needs me to, then I don’t really have a choice. She signs the paychecks.”

The day he talked to Lawrence.com, Cote was rushing off to another job interview, hopeful he can soon have a second part-time job. In between, he plans to start attending Johnson County Community College in the spring with dreams of getting into the Marines and becoming a fighter pilot. It’s a long-term plan that will take him several years, but he’s fine with that because he says once he finishes with his education, he’ll always be in demand.

“We’re always going to need soldiers. You never know what’s going to happen today, tomorrow — anything can happen,” he says. “And, after a six-year (fighter pilot) tour, I’m hoping to become a commercial pilot, if not stay in the Corps.”

Moccia has a plan, too — she wants to be a journalist once she gets her degree. And though she’s having fun chalking her jobs up to a fulfilled college experience, she hopes she can leave the multiple-job-carousel in college.

“I mean,” Moccia says, “this is all fun but I’m not really using my degree.”