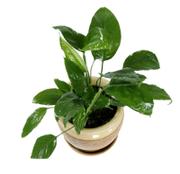 In the wake of the debate on real versus artificial Christmas trees, I wondered whether there was any contest between live houseplants and fake ones.

There are, of course, advocates for both sides. Research says live plants clean the air, improve human productivity and reduce energy requirements. Advocates for synthetic houseplants say you will save on water and fertilizer, save energy taking care of the plant, protect from the heartbreak if a plant dies and reduce the chance of personal injury (not moving heavy pots of soil). Synthetic houseplants “survive” anywhere and only require an occasional dusting.

Although I typically advocate for live plants, a friend with silk ficus trees makes a good argument for synthetics. The leafy green trees really do brighten basements, and the lack of natural light makes it nearly impossible to support real plant life.

I still like the idea of clean air, though, so I explored the research a little more closely.

Most universities and live plant advocates refer to a 1989 study by NASA. The study concludes that, “Low-light-requiring houseplants, along with activated carbon plant filters, have demonstrated the potential for improving indoor air quality by removing trace organic pollutants from the air in energy-efficient buildings.”

At the time of the NASA study, energy-efficient buildings were primarily those built during or after the late 1970s. Early energy-efficiency improvements reduced fresh air exchange, leading to indoor air pollution and “sick building syndrome.”

Did you notice the “along with activated carbon plant filters” part? Researchers grew plants in activated carbon, over potting soil, with the open-ended container over a fan and a container to collect excess water. I have yet to see this setup in anyone’s home, but I have great respect for you if you are growing your houseplants this way.

More recently, a study in India showed a reduction of “incidence of eye irritation by 52 percent, respiratory systems by 34 percent, headaches by 24 percent, lung impairment by 12 percent and asthma by 9 percent.”

Productivity increased 20 percent, and energy efficiency increased 15 percent due to the cleaner air.

Although the NASA study compared many common houseplants and found several to be good at removing pollutants, the study from India only used three plant species. To reproduce their results, you only need four shoulder-high Areca palms per person, 6-8 waist-high Mother-in-Law’s Tongue per person and a money plant.

In the Indian study, plants were grown hydroponically, and the leaves wiped each day. Researchers suggest wiping the leaves only once a week in cleaner air cities.

I couldn’t find any research that says the one live philodendron in the corner of your office or living room will do anything more for you than a nice silk one. I am going to keep growing live plants in my office and home, though. For my friend, I might pick up some fake flowers.