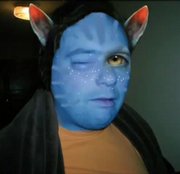 So the nominees for the Academy Awards were announced today, and “Avatar” leads the pack with nine nominations. You might think to yourself, “Hey, it’s not really leading the pack because ‘The Hurt Locker’ also got nine nominations.” Yeah, but nobody saw that movie because it was good. Nobody in the Academy saw it either, so “Avatar” is the film to beat.

The only reason anyone in the media is paying attention to “The Hurt Locker” is because it was directed by Jim Cameron’s ex-wife. I’ve already heard some hackneyed, sexist jokes on CNN about Kathryn Bigelow asking for half of Cameron’s Oscar if he wins. Apparently Jay Leno’s writing staff got jobs in cable news.

But don’t take my word for it…here’s Plinkett’s take on “Avatar.” You might have seen Plinkett’s seventy minute evisceration of “Star Wars: The Phantom Menace” which made the rounds a few weeks back. Plinkett, a fictional reviewer with a deviated septum from the film production company Red Letter Media, runs over “Avatar” with his jazzy scooter and bludgeons it with unflattering allusions to everything from The Blue Man Group and The Garbage Pail Kids. It's as much sketch comedy as it is film criticism, and it works quite well.

WARNING: Some of the language is NSFW and you briefly see Kate Winslet’s side boob from “Titanic.”