What to Do in Larry tonight, Saturday edition

Bowls to be sold at the Souper Bowl cool Friday after being unloaded from the kiln at the Lawrence Arts Center, 940 N.H.

Handmade ceramic bowls by local artists range in price from $10–50. With the purchase of a bowl, participants receive one serving of soup, roll, and drink. Soup provided by Hy-Vee and rolls provided by Great Harvest Bread.

There will also be a silent auction of pottery from Robert Archambeau (Professor Emeritus University of Manitoba and recipient of the Governor General’s Award in Visual and Media Arts) and a silent auction of pottery from Ted Adler (Assistant Professor Wichita State University). These two pieces will be on display in the lobby of the arts center beginning January 9 and bidding will end January 31 at 2 p.m. Participants will have an opportunity to ‘enter to win’ one 8-week class in the ceramics program.

After a tougher-than-expected nail biter against Colorado, the Jayhawks must not look ahead to their Big Monday matchup against Texas and instead focus on dispensing the woeful Nebraska Cornholers. KU beat the 'Holers 84-72 earlier this season in Lincoln, so expect a larger margin of victory as the Hawks go for their 55th straight home victory.

A verité documentary about the legendary music festival Zaire ‘74, "Soul Power" depicts the experiences and performances of such musical luminaries as James Brown, BB King, Bill Withers, and Celia Cruz. The film is crafted from the extensive outtakes that remained after making "When We Were Kings," which chronicled the epic title fight between Mohammad Ali and George Foreman but relegated the music festival to a supporting role.

A reception prior to the screening begins at 7pm, followed by the film starting at 8pm. After party 10pm-1am at Liberty Hall.

Classically trained, Novelo was a long-standing member of the National Symphony of Costa Rica and the Proyer String Quartet. She has performed across the U.S, in Europe and Latin America and has frequently accompanied many internationally acclaimed singer/songwriters, including Brooks Williams, Antje Duvekot, Kelley Hunt, David LaMotte, Don Conoscenti and Johnsmith.

The Twilight Hours @ The Bottleneck

Back in the late '80s and early '90s, Trip Shakespeare was one of the most popular indie acts in the Midwest, consistently packing the Bottleneck with it's boisterous brand of quirky and melodic pop rock. When that project disbanded, bass player John Munson went on to even bigger stages with Semisonic. He maintained his friendship with Trip Shakespeare co-frontman Matt Wilson, however, and the duo have picked things pack up in recent years as The Flops and now The Twilight Hours. The group's new disc "Stereo Night" is music to the ears of the Trip Shakespeare camp, offering some of Wilson and Munson's finest songs to date. 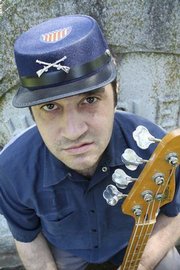 Dan Cook of The Scriveners

The Jim Button Band hit the local scene a couple years back with its enterprising brand of guitar pop. When member Casey Burge headed south to Georgia, Button wrote some new tunes and reemerged as Continents. The recording project translates to the stage with help from guitarist Nathan Smith, bassist Brandon Knocke, and drummer Josh Riepe. Button's occupations with pre-war blues (i.e. Robert Johnson and Son House) and Afro-pop are filtered through a more modern lens, resulting in experimentally tinged songs that you can still hum along to.

Check out our podcast interview with Mr. Button.

What's the hardest component to replicate when assembling a Doors tribute band? Is it the busy organ groove of Ray Manzarek, the jazzy riffing of guitarist Robby Krieger, the atmospheric drumming of John Densmore or the introspective, seductive vocals of the departed Jim Morrison? Moonlight Drive seeks to answer that question. The Wichita-area tribute band strives to create a visual and audio snapshot of the influential band, circa 1969 (a la "The Soft Parade" era).

The Scriveners are a new townie-tastic Lawrence band fronted by Dan Cook (also of The Bubble Boys and Wood Roses). While Cook has been known to moonlight in Hall & Oates tribute bands, The Scriveners have been described as "Jawbreaker meets the Dead Milkmen." If that sounds like a sound that could inspire you to commit a crime, keep in mind that Cook got 103 write-in votes for sheriff of Douglas County in 2004.

A Single Man
Oscar nominee Colin Firth gives a strong, seriously melancholy performance as a grieving gay professor in 1962 Los Angeles, whose life has become meaningless since the death of his lover. Fashion-designer-turned-director Tom Ford's debut is too beautiful for its own good, and ultimately disappointingly simplistic.

Crazy Heart
As a boozing, down-but-not-quite-out country singer, Jeff Bridges delivers another unfussy performance of such depth and truth that you ask, "Why has this man never won an Oscar?" This adaptation of the Thomas Cobb novel is as richly rewarding as a great country song even as it tumbles into overly familiar subjects.