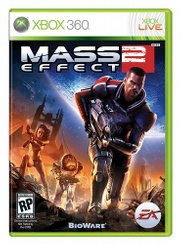 Leading up to the release of Mass Effect 2, I just wasn’t that interested. I’m sure a lot of gamers felt the same way.

I’d played the first game to the end, coping with lackluster gameplay mechanics in return for a vivid story. But I couldn’t see giving up another 20+ hours for that kind of questionable payoff.

But as a game reviewer, I’m obliged to play Mass Effect 2 anyway. I’m happy to report that BioWare heard gamers’ complaints about gameplay and addressed all of them. This is not a flawless game, but the gripes I have are secondary to just how impressed I am with the complete package.

For example, in the previous game you could have perfect accuracy on guns as precise as a sniper rifle and unless your gun had been ranked up and you had the appropriate proficiency points, you could miss completely. This was frustrating to gamers with rock star visual accuracy (like myself) because you were constantly missing your target and you were forced to grind experience points to be a better shot. In ME2, a headshot can be achieved from the get-go and aspects other than accuracy are calibrated by your character’s experience.

Your character’s special skills as well as the skills of your team are all intact, some of them with new control features — this is the only significant remaining aspect of leveling up from the first game. You can now assign quick command buttons to release an AI teammate’s power on the fly, which helps prevent the action-breaking moments from the first game. If you prefer to freeze time and evaluate your situation before changing weapons or using powers, this option remains.

Gone is the automatic snap-into-cover from ME1. The game now functions just like Gears of War and other third-person shooters with the ‘A’ button being your snap in and out of cover button. You can also now vault over obstacles you have taken cover behind.

The Normandy is a bit more integrated into the gameplay of ME2 and definitely requires your attention. You won’t be using it for battles or anything like that, but space exploration now involves limited quantities of probes for scanning planets and limited fuel reserves for travel. In order to get resources of four precious metals in the game, you have to scan planets and drop probes to collect them. At game start you are given a 30 probe capacity and must re-purchase more probes when you’re out. The same can be said for traveling between planet clusters within a galaxy, which requires fuel to move about, and as a result restricts how much exploration you can do without returning to base for a refuel. All in all these aspects slow the pace of the game and at times I felt like I was backtracking for unnecessary reasons. That said, it doesn’t break the immersion.

The story and dialogue trees have also been updated to make for a more natural experience. You can still earn paragon (good) or renegade (bad) points based on your words and decisions, but you can now be a heavy paragon that has done enough renegade acts to give you access to both special conversation choices in situations. They have also thrown in on the spot options that flash on the screen for a few seconds during a conversation. If you press the appropriate trigger that displays, Shepard will interrupt the conversation with an action to resolve the situation, for better or worse. It’s really a toss up if you want to react in each situation, especially because I found it making my situation worse at times. On the other hand, a few of these split second decisions took care of everything nicely and even threw in some decent comedy.

The writers need to be commended for how well written this story is and how quickly you can become encompassed in a complicated lore that involves several alien races. Even if you haven’t played the first game, you should be able to identify any race on sight as you near the final act of the game. On the subject of the first game, people always wonder if playing the first game is required. ME2 can stand alone as a satisfying experience in terms of gameplay, but the lore and story surrounding it (not to mention the ability to import your character from the first game) makes it tempting to play the first. If you found the way the first game controlled just too frustrating, I’d recommend looking up the story and just jumping into the second. Those who stick it out through the first will be rewarded for their work with both an achievement and more personalized story.

ME 2 was the first game in a long time that I just couldn’t put down. The dynamic story sucks you in from the opening scene and doesn’t give up until the game’s epic conclusion. The gameplay makeover was necessary to rope in those shooter fans that have enjoyed games of this type and BioWare made a great decision in going to the third-person shooter style. Unlike any game I’ve ever played before, the suicide mission made me sweat at the thought of losing a character I had built up for over 50 hours and two full games. There are plenty of reasons to replay this game, if only to try to perfect the outcome from your first game or to play a non-imported character to see what cannon decisions BioWare had made for the second game. This game is an impressive experience that needs to be played by anyone who has an Xbox 360.

Supplement: On DLC and the Cerberus Network

For those that have activated the Cerberus Network, two packs have already gone live, both at no charge (and BioWare is claiming there will be more free content added shortly). Both packs seem a little stripped even for DLC and wouldn’t take much more than 30 minutes to complete together, but for no charge I can’t complain. I do recommend you download these packs immediately since they can affect and integrate into your campaign. Zaeed’s loyalty mission is one of the more challenging in the game, gives you new weapons and has a developed story. Unfortunately beyond that Zaeed is a limited character that doesn’t even have conversational pieces when you approach him on the ship except for some quick quips. He is decent in a firefight and can be a useful addition to the team, but because I didn’t feel very connected to him I rarely used him on missions. The Normandy mission is a quick fetch quest that has more emotional connection than anything else, but again it seems this may be the goal of those that developed it. Normandy did a great job of doing a simple but effective bridge from the memories of the first and working into the second. Those that didn’t play the first will completely miss the point of the mission, which can be viewed as a misstep.

Great game but exploring planets by scanning is a poor replacement for the Mako. Hopefully the release date for the hover tank DLC is announced soon. The worst part about scanning planets for resources is that you can't sell excess elements. By the end of the game I was rolling with 100,000 of each element and zero space bucks to buy the remaining upgrades at stores.

Yeah it still seems that games can't quite find that balance between currency and resources. Assassin's Creed II had this problem big time - by the end of the game you had enough money to buy all of Italy! Here's hoping the hover tank mission hits soon.