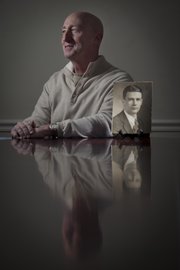 Mark Edwards is a periodontist and was influenced by the experience of his grandfather, George Prazak, who was a physician.

“I adored my grandfather and loved spending long summers with him in San Antonio,” he says. “He was a general surgeon who became a dermatologist after World War II. He emphasized generosity of spirit and the importance of saving for the future.”

Edwards’ family moved a lot before settling in Lawrence in 1969.

“My father was a traveling salesman who worked really hard to provide for us,” he says. “He instilled in me the need to have a life plan and to stick with it.”

“I’m a firm believer in the importance of team sports in teaching life’s lessons,” he says. “It’s not all about winning. It’s about building character, dealing with failures and losses, and creating balance in your life.”

He wanted to follow in his grandfather’s footsteps but says he didn’t have the temperament for surgery and couldn’t face giving people bad news. With his grandfather and father’s financial help, he opted to attend Nebraska’s dentistry school followed by a two-year periodontics residency at Louisiana State University’s school of dentistry in New Orleans.

“Periodontics is the perfect fit for me,” Edwards says. “It’s a wonderful blend of medicine and dentistry. I love working with patients to help them eliminate the risk factors for gum disease and help create positive behavioral changes for ongoing successful treatment.”

After completing his specialty residency in 1987, Edwards and his wife, Gretchen, a dental hygienist, decided to open their own Lawrence practice straightway.

“I knew I wanted to be my own boss, work hard and retire early,” he says.

He took a five-year lease on Mesa Way, and like his father, became a “salesman.” He visited local dentists to laud periodontics’ importance in preventative health care. By the time his lease expired, Edwards had established a strong patient base and decided to build his own dental offices at 4830 Quail Crest Way.

“It was risky because we were expecting the first of our three children, but Gretchen and I decided to go for it,” he explains. “My parents co-signed on the loan, and my mom worked in the office. I now rent out space to others, and I’ve taken on a partner, which has worked out great. We’re able to cover for each other so I can attend my children’s activities. I also value seeing my own children develop a close relationship with my father, much like the one I had with my grandfather.”

He’s taught in the University of Missouri’s graduate periodontics department for the past 22 years and is a member of multiple regional and national written, clinical and computer-simulated test construction committees.

“I tell new dentists they’ll get out of dentistry what they put into it,” Edwards says. “It’s a great profession.”