Take your first trip down the garden lane 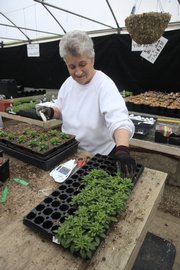 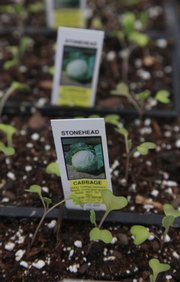 The abundant, hazy days of summer might be hard to imagine during this time of never-ending cold, but give yourself permission, if just for a little while, to think of such things as the snap of fresh green beans and crunch of crisp lettuce. And while you’re thinking about it, think about how neat it might be to head to your own little patch of earth and pluck any of these summertime delights straight from the ground.

As daunting as it may sound to a beginner, starting your first vegetable garden can be easy — not to mention economical, tasty and fun, too.

Are you planning to plant a vegetable garden this year?

To get you started, we talked to a few professionals about planning a first-time vegetable garden — something you should be doing relatively soon if you want fresh stuff starting in the spring. We’ve created a step-by-step guide for first-timers, along with a list of suitable plants for our area and an approximation of when to plant and harvest them.

“Sun is the most important thing, so the more sun you have, the better production you’re going to get,” Smith says. “Drainage would be No. 2, because you want an area that drains well so that water doesn’t sit there. And if you have a low spot, you can build it up with soil and organic matter to help it drain better. You might think a little bit about protection from wind, but it’s not the most important thing.”

South-facing gardens get the most sun and are most versatile, but it’s possible to have good luck with other orientations.

2. Container, raised bed or directly sown? Planning out what you’re going to put where is a huge part of gardening success, even if it might be a little daunting, says Peter Avila, direct seeder at Howard Pine’s Garden Center, 1320 N. Third St.

Generally, your choices for where to grow are in containers like clay pots, a raised bed you make yourself or directly sowing the plants into your soil. All methods have their pros and cons, Smith says.

“Raised beds are really nice, I think for drainage and for keeping it kind of conformed into a space. But if you don’t know for sure if you’re going to do it again next year, you might not want to spend the time to build it,” Smith says. “And, really, if you’re just starting out, you’re better off trying to stay small and just grow a few things or even just try to do containers. Buy some large flower pots, put a tomato or pepper plant in one of those and try that for the first year.”

3. What do you want to eat? There are tons of choices of what might grow in our climate, but for your first time, Smith suggests going with what you know instead of being entranced by something exotic you’ve never eaten before.

“I like to grow things that I like to eat. I think that’s the best way to get started,” she says.

Also, talk with other gardeners in your area about their experiences. You may find that they have had trouble with certain fruits or vegetables and could warn you about what’s difficult to grow in Lawrence’s soils. Smith says that Brussels sprouts and eggplant both have been known as difficult to grow here.

“The first year, it’s nice to plant green beans or something reliable,” she says.

4. Prepare the soil. Smith suggests testing your soil, so you’ll know if you need to add any nutrients. Just bring some earth into the Extension Center, find out how it rates, and you’re all set.

“That soil test will tell you if you need just PH; most plants like slightly acidic soil, and we typically have high alkaline soils here,” Smith says. “And since most of our soils have high numbers of phosphorous and potassium, you don’t need to add more, you just need nitrogen for your plants.”

5. Plant. Once you’ve prepared the site and planned out your garden, it’s time to plant. When making your plans, you should have decided on seeds or transplants and also figured out when to put each plant in the ground.

“For the first-time gardener, I would suggest starting out with some of our already bedded plants,” Avila says. “Those guys are going to be prepared to go into the ground as soon as the customer comes in because they’ve been acclimated from the very beginning.”

Smith notes that careful planning can mean a three-season garden that will last you from spring to winter.

“If you plan carefully, you can do some things in succession,” Smith says. “So, like where you have your lettuce in the early spring, you can plant your green beans there later and save some space.”

6. Check on it. Don’t forget to look in on your garden every couple of days before harvest time and daily during the plants’ expected harvest. You’ll want to make sure it is well-watered and also to keep a handle on any pests or weed problems as well as any plants that need to be harvested. You may go by one day and see no ripe zucchini and then come back two days later and be up to your ears in zucchini.

7. Eat. Harvest your garden’s bounty and enjoy every last bit!

What grows well here and when to plant it (Note: Some plants are mentioned twice because they can be planted more than once)