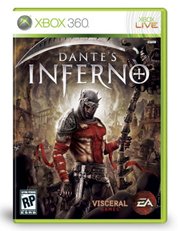 When Visceral Games (developers of Dead Space) announced that its next title was going to be Dante’s Inferno, an action hack-and-slash title based on the classic poem/novel, the idea sounded completely absurd.

From a story standpoint, it is just that. Liberties have been taken in abundance including changing poet Dante Alighieri and turning him into a muscle-bound warrior with a cross stitched into his chest. But while literary types will have a field day with the absurdities and inconsistencies, Visceral has done an amazing job at taking the descriptions of Hell in Dante’s classic and bringing them to life in awesome detail. As far as the gameplay mechanics themselves, they steal from God of War completely, down to the aspects that Sony’s classic would have done better without.

The story was kept under wraps during most of the development cycle, which is probably for the best — it’s lame. Basically, Dante enters Hell as the aforementioned warrior to save his wife’s soul. Along the way Dante encounters truly unsettling creatures. Note: this game is heavy in adult content. You will see graphic violence, various bodily fluids and even an entire level of topless females.

So gameplay — like I said, this game walks, talks and acts just like God of War. Your weapon works just like the blades of chaos and has a light and heavy attack. The combos are the same combinations and even have the same basic range and animations from God of War. Finishing off most large enemies requires you to enter a quicktime event that will usually be a few varied button presses followed by a mashing of one button until your enemy perishes. You have magical attacks that unlock throughout the game and you can spend your collected experience points (which come in the form of souls) to upgrade your attacks and unlock special abilities and combos.

This won’t matter though, because save for a few key moves that you can spam over and over, you won’t be using many of your abilities. Fountains have replaced the traditional treasure chests, but the orbs themselves share a near identical look and color scheme. In its defense, the fact that so much has been ripped off from God of War also makes this game just as fun and addicting as God of War was.

As mentioned before, some of the most annoying parts of God of War have also crept into Dante’s Inferno frequently. Pushing boxes and kicking them in timed actions are a common task as are critically timed platforming sections, complete with an unforgiving penalty when you aren’t perfect. There are many different items and bonuses hidden through Dante’s Inferno and the developers seem to insert these collectibles in the middle of a difficult platforming section. Since the game has a rare batch of checkpoints combined with save points, each time you fail you have to re-collect everything. This results in frustrating repetition of long sequences.

Controls are tight and responsive, which is necessary for a game that has a brunt of its moves based on timing. The game ran at a smooth 60 frames per second during my entire playthrough and it felt good to play a recent game without even the slightest hint of screen tearing or slowdown. While I would never imagine Hell to have a vibrant array of colors, each layer has a specific color scheme and style that was absent with the enemy variation. Sound design bounces in and out from being completely forgotten to suddenly making you jump when whispers come out of your back surround speakers. I was glad to see that the detail and resources from the Dead Space sound team weren’t completely wasted.

Ultimately Dante’s Inferno looks and plays well, and fans of God of War will likely enjoy a different take on familiar gameplay. Others will find this to be little more than a game of endurance and patience. Either way, if you can summon the will to complete the game’s 7-10 hour campaign, there’s no incentive to return for another round.