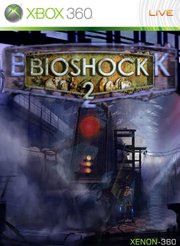 The first BioShock is easily one of my top 10 games of this generation. Blending solid controls, a thought-provoking narrative, and a fantastic setting, the game was a high-water mark for modern gaming. BioShock 2 has maintained the setting and controls and, while the developers have added both additional gameplay elements and a multiplayer component, the sequel does not fully live up to the high standard set by the original — it feels more like an add-on than a full-blown sequel.

The original BioShock’s biggest selling point was its story – a tale of one man’s vision being ruined by human greed and treachery. Set eight years after the events of the original, you take the role of a prototype Big Daddy, a diving suit-clad behemoth designated Subject Delta. After being forcefully separated earlier in the game, Delta is seeking out his missing Little Sister, Eleanor, who continually contacts him using their psychic bond. Delta must rescue or harvest additional Little Sisters, kidnapped from the surface, to collect ADAM, the genetic material on which Rapture’s denizens feed. Rapture, the would-be underwater objectivist utopia founded by the late Andrew Ryan, is now controlled by psychologist Dr. Sophia Lamb. In the time since his demise, Dr. Lamb has sought to create a new utopia based on an extreme collectivist doctrine – the precise opposite of Ryan’s vision of individual rights.

And, guess what? Rapture is still a very moist slum run by an overzealous tyrant. The characters are not nearly as interesting as those in the first game, and the narrative lacks the intrigue that permeated the initial game’s story. Whereas the first game’s Shymalan-esque twist completed changed the player’s perspective of their previous actions, the sequel has no real twist.

One area where the sequel does improve, though, is in the effect of your choices on the outcome of the game. Beyond the choice to save or harvest the Little Sisters, Delta also has the choice to spare or kill some of Lamb’s underlings, leading to a very direct consequence on the ending. The game has a relatively standard 12-15 hour length, although there are multiple endings available based on your choices. The initial 90 percent of the game feels more like BioShock 1.5, but the final 10 percent is thoroughly engaging and worth the wait.

The gameplay received minor upgrades from the original title, without sacrificing the tight controls. Delta can dual-wield a plasmid power and a weapon, which makes combating the genetically altered splicers, the drug-fiending denizens of Rapture, much more fluid. The weapons and plasmids all receive one or two new abilities beyond their original iterations. In addition, you can also use an adopted Little Sister to harvest ADAM from corpses scattered throughout the level, leaving you to fight off the ravenous hordes of splicers who are also seeking to ingest the genetic material. The game’s normal difficulty is more strenuous than the original.

Graphically, the game is only modestly better than the original. While the new levels sport the same neon-highlighted art deco style, they feel like “more of the same.” Everything lacks the “wow” sensation you got in your first trip to the drenched dystopia. The game’s soundtrack is also similar to the first game, using evocative orchestration and period-specific songs to both heighten the tension and illustrate how little the city has changed since its founding. With the exception of one period with an extended series of squealing violins, the sound design remains one of the highlights of the series.

While the first game was solely a single-player experience, the new developers included a multiplayer component to the game. The multiplayer modes, which are themed variations on the standard FPS match types, use a leveling system similar to that used in the Call of Duty series. The player gains experience in the form of ADAM. As you gain experience and levels, you unlock new weapons and weapon upgrades, plasmids and gene tonics for in-game use. There’s nothing particularly compelling about it — unlike more popular multiplayer games, lobbies during off-peak hours were as desolate as the sea floor.

BioShock 2 is a solid, if unspectacular, sequel to a game that didn’t really need one. There’s enough new content to justify a purchase by BioShock fans, but nowhere near enough to earn it the “Game of the Year” achieved by its predecessor. As a standalone game, BioShock 2 is above average, but, as a sequel to one of the best first-person shooters of all time, it is underwhelming.

It should be said out right that I'm a huge fan of the first one (as written here: http://www.lawrence.com/weblogs/hate_...), and as such biased in favor. But I'm sorry, this doesn't read like much of the game was played or it was really rushed through, like it's just a list off the back of the game (which also pumps dual wielding, which you could do in Bioshock). You don't even mention the new Rumblers and especially the Big Sister, one of the most genuinely overwhelming enemies since the original daddies.

I had the same "More of the same" sensation from the setting for all of 30 minutes, until I thought I had her cornered in the Adonis' Grand Foyer. She panics and cuts the wall away, flooding the area and allowing you to leave Rapture. Exploring around the city, finding what damage man can do even when sealed away hits you just as hard as the intro to the first game.

I could talk about the good of these games for hours. The only complaint that I have so far is that I wish I would've played through 1 again, because this one starts right out with Splicers everywhere and Daddies and Sisters to deal with, so it's much harder.

I think we'll just have to agree to disagree here. I loved the first but, as I said, I didn't find anything about the sequel that really justified its existense. Although I will (and did) say that the ending was superior to the first.

You are right that I should have mentioned the Big Sister. I can't believe I forgot her. I thought that she was under-developed. She had been built up in all the preview footage to be something amazing and something of the "big baddie" of the game, but your encounters with her are pretty ho-hum. I didn't think the Rumblers or the new splicer really justified any discussion, frankly. There was nothing inherently new, different, or difficult about them.