Miniature fairy garden with added with color of green from schefflera and soft pink miniature roses. 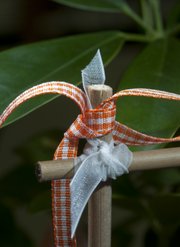 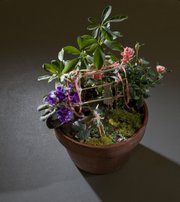 Are you looking for a gardening activity that is more intriguing than re-potting houseplants? Need something to cure the winter blahs or a kid-friendly activity for the next snow day? A fairy garden may just be your answer.

“All you need are some plants, a little path, some sort of structure, and, of course, a fairy,” says Jane Cram, an avid gardener and commercial pilot who moved to Lawrence last year from California where the gardens are popular.

Cram started making fairy gardens about 10 years ago and still visits a nursery near her previous home that specializes in fairy garden supplies.

“They have gazebos and trellises just special for the gardens,” Cram says. “There are even fairy-sized dishes so you can set a little table.”

Rather than purchase a lot of expensive miniature items, though, Cram recommends using your imagination. She and her sister visit craft stores and floral supply stores looking for items with which they can be creative. From her supply box, she shows me a rose-shaped candle holder that she plans to turn into a tiny pool and a wooden disc that will, when painted, become a tabletop.

To build your own fairy garden, pick out a container that is large enough for the items you want to include. In the summer, Cram uses a 16- to 18-inch diameter shallow bowl-type planter for an outdoor fairy garden. She recommends using a pedestal or table to elevate the garden so it can easily be viewed. An old birdbath might work well for a fairy garden.

Next, select a few plants for the garden, looking for varieties that will stay small or can be pruned, and that have different colors and leaf textures.

“I really like herbs because they work so well, and you can clip them and use them,” Cram confides. There are a number of small ferns, sedums, succulents and other plants that will also work well for a fairy garden.

Cram also recommends including at least one flowering plant, preferably with very small flowers that are in scale with the fairies.

After the plants are selected, pick out something to provide some structure in the garden. Something as simple as a handmade bamboo trellis will add to the design. Determine how you want to lay the garden out, and when you are ready, transplant the plants and structural item(s) into the container.

A path can be created with aquarium rocks, tiny colored gravel, beads, sand or whatever else your imagination suggests. Add one or two fairies (or more, depending on the size of your garden). Since one of Cram’s ceramic fairies is in a seated position, she often uses a small ceramic mushroom or a tiny upside-down flowerpot as a seat.

For finishing touches, Cram recommends covering the entire soil surface with a groundcover or moss. Dried moss is a nice alternative for an instant soil cover. Elephant thyme and some of the other creeping thyme varieties make nice groundcovers.

Seeing a Tinkerbell-ish fairy peaking out from behind a tiny bamboo trellis leaves me feeling a little enchanted, and I am excited about creating my own fairy garden.

— Jennifer Smith is the Douglas County Extension Agent — Horticulture for K-State Research and Extension and can be reached at 843-7058.