The old stone at Stony Point

The home of the Lawson and McMillen families circa 1917. In back: Sara and Logan Lawson. In front, from left: Wes Lawson (younger brother of Bertha McMillen) and the first grandchildren, Dale and Don McMillen. 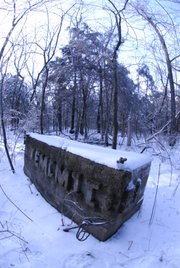 The mysterious monolith in the Stony Point valley.

In the 1920s, Letha McMillen was growing up in a house in the Stony Point valley 12 miles south of Lawrence.

She remembers spending a lot of time with her brothers and friends exploring the Baldwin Woods around her home. They’d find all kinds of things in the woods from bygone days — old glass, forsaken belongings and whatnot — but one thing stood out in particular.

I looked up McMillen to talk to her because, 90 years later, I was exploring the same Baldwin Woods and came across a similar scene — only it was her house.

It’s a surreal feeling to stumble upon an elaborate limestone foundation in the thick of almost impassable cedars. Decades-old trees growing between the stone steps that once led down into a basement have a way of robbing your own home of its sense of permanence.

Stranger still, though, was what I found about 30 feet away: a mysterious concrete monolith.

It looked vaguely like a headstone — it was about the right size, with weathered lettering. But it seemed to be too industrial for a headstone, and if the letters spelled a name, it wasn’t apparent anymore.

What was left read “JEMCMIII” on one side, and “EN” wrapped around another. Now it appeared to be less of a name and more like a riddle.

My best theory was that the MCMIII part, or 1903, was a plausible date for the monolith’s creation. The placement of E and N corresponded to the cardinal directions they faced. Maybe this thing communicated some other lost secret?

I took a photo and showed it to a variety of people to see if they might have some sort of clue. Eventually I showed it to Ray Wilbur, a retired stonemason who lives near the Stony Point valley.

Wilbur’s something of a historical preservationist in the area. He’s repaired and restored several century-old buildings in the area, and has known enough old-timers to have a pretty good idea about all kinds of local history.

He was fascinated by the monolith, and perplexed by the lettering — until I told him where I found it.

“I wonder if that doesn’t say McMillen,” he said. “Chet McMillen’s family lived around there, and he’s still up in Baldwin. You might ask him.” 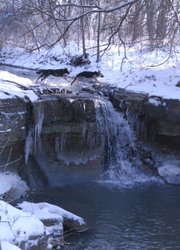 A photo of the waterfall Letha McMillen remembers from her childhood, taken in Feb. 2010.

Undated photo of a saw mill owned by Bill Sinks near Stony Point where the McMillen boys sometimes worked. When the McMillens cut wood on the Kelley's land, they sawed everything by hand.

Sure enough, I’d stumbled across what remained of the old McMillen home, where siblings Chet and Letha had lived until it burned to the ground in 1934.

Now in their 90s, they both have vivid memories of that place.

“It was nice. I can still see it,” says Letha. “The house sat down along the lane. Grandpa had a garden off to the side, and if you followed the lane down further there was a waterfall down there.”

Through much of the Depression, the family provided for themselves off their 10 or so acres. They had pigs and a couple cows, farmland for corn, a vegetable garden, peach and apple trees. They hunted squirrel and rabbit, and they harvested wild edibles — lamb’s-quarters, dandelion, blue stem, black heart, wild lettuce and mushrooms.

In the winter, the men worked harvesting firewood from the Stony Point valley, usually from the Kelley family’s land, says Letha.

“That’s how they made their living and kept our table filled,” she says. And that’s where they were that February of 1934 when the house burned.

“Dad had just bought mom a new Home Comfort cook stove, a nice big stove. She was so proud of it. She had a big ham in there cookin’ because the boys would be coming home from working all day,” Letha says.

She says no one’s quite sure what happened, but the fire apparently burned through the chimney and spread to the house before anything could be done.

“Grandpa was not able to walk by then, so she got grandpa Lawson out of the house in a rocking chair and set him out in the yard. She had that great big ham in the oven, so she got the ham out,” Letha laughs. “Guess who got the ham? The dogs got the ham.”

“Of course all the neighbors came. We had an old crank telephone, and somebody yanked that off the wall. Mom’s rings were there, so they grabbed them. But a lot the stuff couldn’t be saved,” she says.

Remains of that day

Now that woods have subsumed what’s left of the McMillen’s home, the monolith is the lone remaining clue as to the life that was once there.

But Letha doesn’t recall seeing it there before. It can’t be a headstone — most of the family is buried in the Vinland Cemetery.

However, she does remember her grandpa working with concrete and figures he taught her dad, Jack Edwin, his technique.

“My grandpa McMillen lived in Lucas, Kansas — where the Garden of Eden is at — and he mixed the cement for the Garden of Eden,” she says. “They’ve never been able to figure out what the recipe is for the mixture, but it don’t deteriorate like a lot of cement does. I can’t help but wonder if dad didn’t get the recipe from him. For standing that long, there must be something to it.”

Her brother Chet remembers the monolith being there, but he can’t say for sure what exactly it was for.

“It was out between the house and the barn,” says Chet. “There was an old one-lung engine on top. He used it for something, but I can’t think what it would’ve been.”

Chet’s nephew Danny McMillen had only been out to the old family land once about 60 years ago when he was 10. He doesn’t remember much from that visit, but the monolith piqued his interest, so he asked around to see if his cousins might have some idea.

“One of them made the comment that that’s where the old generator was,” Danny says. “Hard to say what it was used for — the house wasn’t wired for electricity, but maybe they had one bulb wired up or something.”

He was amused that Jack Edwin put his name on the monolith: JEMCMIII ...EN

“He sure went to a lot of trouble to get his name on there. That took a lot of intricate work so that the concrete would even push out into the letters,” Danny says.

“There was just something about him — he liked to leave his mark. And when he built something, it was going to last through hell and eternity,” he laughs. “You never know when you’re walking through the woods — how silent they are today, but how many stories are in there.”

Those audio clips of the interview with Letha and Chet are absolutely fantastic--at times transcendent and profound. They both seem like real genuine, kind people.

Phil, This is a wonderful story. Thank you for it.

great story phil, i bet it was a treat to talk to the old timers.

this could be on This American Life. Great story!