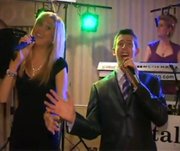 Thanks to trailblazers like hip-hop Lothario Tom O’C, Ireland is also establishing itself as the ironic music capital of Northern Europe.

Furthering this fledgling reputation is Crystal Swing, the Irish synthesizer country and western family band. Step aside, hundreds of years of rich culture and tradition…it’s time to add boot scootin’ to the Riverdance repertoire.

Here now is Crystal Swing at some sort of weird Irish bar mitzvah performing their new single, “He Drinks Tequila.” WARNING! Do not mix Bushmill’s with Jose Cuervo. It's like mixing Irish people with country music. (Via Videogum)