Shop like a dietitian: We ask Lawrence experts how to make healthier choices at the grocery store

Lawrence dietitian Shannon Jones reaches for a package of Yokids yogurt, Friday, Dec. 18, 2009 at the Sixth Street HyVee store. Jones believes that 50 percent of a shopper's items should be vegetables and that shoppers should stick to the periphery of the grocery store because, most often that's where they will find the healthier food items.

What’s the first thing a dietitian would suggest you toss from the refrigerator?

Lawrence dietitian Stacy Hendrickson provides tips for navigating food shopping when trying to make healthier decisions in the new year. She checks the ingredients of a bag of pretzels.

• Go several times a week. One way to eat more produce is to shop more often, says Rippetoe. She recommends buying just a few pieces at a time to make sure you will eat it before it goes bad. When you’ve run out, just head to the store and grab some more.

• Plan your meals ahead of time. All three dietitians recommend planning your meals and snacks and sticking to it.

Dietician Staci Henerickson gives some healthy pointers for grocery shopping during a recent visit to HyVee. We also get a chance to see some of the items in her cart she picked up for her family.

Vowing to eat right is an easy resolution to make, until faced with the chance to eat your words along with a few cookies. If you’ve resolved to eat better in 2010, what better way to learn what to put in your cart than to find out what a registered dietitian would put in her cart?

So, we hit the aisles of Hy-Vee, 4000 W. Sixth St., with three people who make eating right their business: Staci Hendrickson of Healthy Balance Inc., Shannon Jones of Simple Solutions and Linda Rippetoe, who is on staff at Lawrence Memorial Hospital. Want to steer your diet in the right direction this year? Check out their tips for a healthy cart.

• Shop with a list. The first step to a healthy cart? A healthy list of what you’re going to purchase. It will save you time, money and calories because you’ll be less likely to buy on impulse, all three dietitians say.

“Having it written down will prevent you from making poor choices when you get inside the store,” Jones says.

“I always say 50 percent of your basket should be from the produce section,” Jones says. “And the more color and the more variety that you have is indicative of more nutrients.”

• Color. Color. Color. Jones hinted at it above and Hendrickson will go one step further — your cart should be as vibrant as possible.

“You want to have as much color and variety with the vegetables that you pick as possible,” Hendrickson says.

• Think seasonally. Rippetoe suggests making an effort to buy produce in season because not only will it be fresher, it’ll be cheaper. So this time of year, this oranges, pears, grapefruit and apples she says.

“I think it helps with the budget, because that way things will be cheaper. These are 68 cents a pound — that’s really good,” Rippetoe says, picking up a few in-season oranges.

• Buy what you’ll use. There’s no shame in short-cut vegetables: Precut and washed, frozen and even canned. Buy what you’ll actually eat says Hendrickson, you don’t get points for buying veggies but not using them. 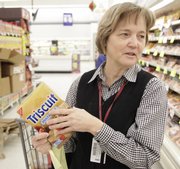 • Buy what you can afford. If organics aren’t in your budget, that’s OK, what’s more important is to buy the best food you can for your money says Hendrickson.

“The more important thing is that you are actually eating it,” Hendrickson says. “If somebody is feeling that they can’t afford organics, so therefore they’re not going to buy vegetables, I wouldn’t want them to make that choice.”

• Shop the perimeter of the store. Very few of your items should come from the store’s interior, where the more processed foods lurk, says Jones. Some staples you should venture into the aisles for? Canned tuna, whole-wheat pasta and beans.

“The inside of the store — you’re going to find more hidden fats and unhealthy sugars added in,” Jones says. “And so, kind of a trick is to spend the majority of your time on the perimeter of the store.”

• If you do buy processed foods, read the label. All three dietitians say that reading not only the nutritional facts, but the ingredient lists too, is incredibly important when trying to make healthy decisions. The fewer and more easily pronounceable ingredients, the better, they say.

“It is time consuming to go in a grocery store and spend time doing that,” Rippetoe says. “But it’s just a learning process to look at labels.”

And if you do lapse into an old habit an buy something unhealthy not on your list? Don’t panic, just don’t eat it all, says Rippetoe.

“It’s not to say that you should never have those things,” Rippetoe says. “It’s (just that) with all these things that we consider bad is that we have too much of them when we have them.”