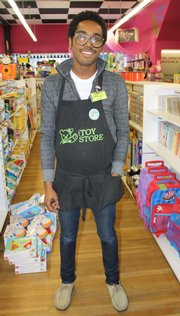 Super Jaquard Ciccio frames purchased a year ago for 144 euros. 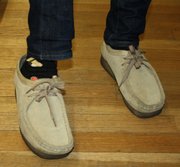 Clark Wallabees shoes purchased at the Clarks store in February 2009 for $115.

What were you doing when scouted: Working at the Toy Store.

How would you describe your style: I'd describe my style as a combination of old and new wash-and-wear styles. I'm definitely broke, so that also factors into it, but I don't let that steal my shine. I enjoy heather grey tops and colored socks.

What are your favorite fashion trends: Braces (a term for suspenders), burnout shirts, raw denim and real fur.

What would you like to see more of in Lawrence: Brown people and more girls in suspenders and bow ties. I think unisex is always kind of hot. Mullets on boys and girls. Also, more people in unwashed/raw denim. I'm tired of seeing whiskers and light fades. Lastly, real fur is always dope, despite what might be hip in Lawrence.

People say I look like: Greg Enemy. That's my partner, but I think we've got a different style going on. I'm Prince, he's Michael.

Do you have any New Year's resolutions: Get famous.

Real fur is always dope? Ya you must be a real ignorant moron. Thats so cute that you have wear skinny jeans, and different looking glasses to get that perfectly grungy hipster look. But please, try to obsess less over your style and understand where real fur comes from.