Message received 1:10 a.m., Aug. 28, 2009:
“Without the crisis line, I doubt that I would be alive. I’m still not thrilled about being alive, but I know that I can call on the worst days and it helps get me to the next one.”

Odds are, your inbox doesn’t have many messages like this — unless you happen to be a volunteer at Headquarters Counseling Center.

The Lawrence-based agency gets calls around the clock from people in turmoil: the recently laid-off, those drowning in debt, going through a divorce or a death in the family, people who are considering suicide for all kinds of reasons ... the sources of pain are as many and diverse as the people who call in.

Of the nearly 19,000 calls Headquarters received last year, most were fielded by volunteers like Amanda Schwegler.

“The best part about Headquarters is being able to hear, at the end of a call, that the person you’ve been talking with sounds better, says they feel better, and seems better able to handle whatever they originally called about,” Schwegler says.

In the year that she’s been volunteering, Schwegler says one of the calls that affected her most was from a woman who’d lost her job and suddenly had no support network.

“Not only was she dealing with the financial issues, but much of her social circle was work-based. So … she felt isolated, alone and hopeless,” she says. “When I answered the phone, she was sobbing and thinking about suicide. We talked for a long time, over an hour, and she sounded calmer as we talked. Obviously, that phone call alone didn’t fix her financial or friend troubles, but by the time we hung up, she’d agreed that she wasn’t going to kill herself that night and we’d made a plan for her to start to find the help she needed.” 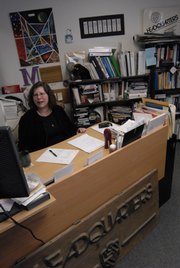 Unfortunately it’s getting harder and harder for them to do so as volunteer numbers have been steadily falling from their peak in the mid-1980s, says Headquarters director Marcia Epstein. Then they had 80-plus volunteers. These days they are stretched thin at 30. That means when multiple calls come in at the same time, a lone volunteer must decide which caller is in more urgent need.

“Our volunteer numbers are lower than they’ve ever been in the history of the center,” Epstein says. “It seems like people are less comfortable taking on commitments that are outside their own small network. I think people spend an enormous amount of time watching TV and doing other things, so I don’t think it’s truly just time.”

Whatever the reason, Epstein hopes more Lawrencians will at least consider becoming a part of the community-driven support network this year. To that end, an informational meeting — 6 p.m. Tuesday at the Library Public Library — will help potential volunteers weigh the challenges and benefits of getting involved.

Epstein says that joining Headquarters not only provides critical support for those suffering in the community, it has very real benefits for those volunteering their time.

“When you realize the proportion of things in your life that are hard versus good compared to some of the people you talk to, sometimes it makes you feel better about the opportunities you have in your own life,” she says.

It can also be beneficial professionally and socially.

“One person who worked at The Buckle downtown said that volunteering here made them more at ease with customers,” Epstein says.

“Another person who worked at the Sally Mae loan center here said her co-workers would comment on how she rarely got the people who were really angry. She said, ‘It’s not that I don’t get them when they’re angry, it’s that I talk to them differently than a lot of people do.’ She was better at calming people down. Sometimes it takes away people’s intensity when they know that they’re actually being listened to.”

Epstein says the need for more volunteers is particularly urgent now, as the suicide rate in Douglas County has been unusually high in the last few years. The 11 suicides here in the first half of 2009 is twice the national rate.

That’s a big part of why Peoples Bank has financially supported Headquarters. President Maley Wilkins says when the bank started its partnership with Headquarters in 2006, “Four of our 22 bankers at the time … had direct experience with teenage suicide in their immediate family. I found that statistic amazing. Our thought was that if an entity, like a bank, would talk about this important topic that it would open the door for others to have the discussion as well.”

Epstein says, “Being part of that process is just amazing. It’s not that clear every time we talk with someone, but you have those times where you can feel it — it’s making a difference. It’s giving some hope. It’s giving some relief.”

Among the traits that potential volunteers should have, Epstein lists: