Re-opened mic: After a run-in with the copyright police, Mudstomp Mondays picks up where Pub Sessions left off

The day the music died came earlier than expected at Dempsey's Pub.

For a too-short year, the Pub Sessions brought bluegrass cheer to the fledgling bar at 623 Vt. Young pickers jammed alongside the older generation who came of age at the Walnut Valley Festival in the 1970s. Frequent guests included members of JR & the Juniors, The Calamity Cubes, The Prairie Acre and The Alferd Packer Memorial String Band. The event was free, and the beer flowed freely, especially for the musicians who accepted pints as payment.

Then, last fall, it all came to a crashing halt. The wrecking ball was a letter from ASCAP: The American Society of Composers, Authors and Publishers. It informed Dempsey's that the bar would have to pay licensing fees if it wanted to continue hosting live music, unless it could prove that no copyrighted material would ever be performed. It also said that an ASCAP representative would happily fly out - at Dempsey's cost - to listen to a jam session and determine whether any music was copyrighted. If Dempsey's could pass the sniff test, the bar would thereafter be subject to a fine in excess of $1,000 if someone got caught singing "Happy Birthday" (or any other copyrighted song) within its walls.

Faced with the choice of paying thousands of dollars in annual licensing fees or risking a subpoena from an ASCAP lawyer, Dempsey's simply opted to stop doing live music.

And just like that, Lawrence's bluegrass scene sung a high lonesome song.

In the music business, ASCAP - and related organizations like BMI and SESAC - are often regarded as heavies who ruthlessly extort money. Once your venue pops up on ASCAP's radar, you won't get them to go away until you pay the fees or turn off the music: whether it be on a stage, in a jukebox or from a bartender's iPod.

Since 1914, ASCAP has defended the rights of its members: songwriters who wrote hits such as "Mack the Knife" and "Danny Boy." The union sticks up for the Don Schlitzes of the world. If you're not familiar with Schlitz, he wrote "The Gambler," but he never sold a fraction of the tickets, T-shirts and chicken wings that Kenny Rogers unloaded.

Even the venue owners who grumble about their yearly ASCAP dues generally are sympathetic to ASCAP's mission: ensuring that songwriters get a cut whenever and wherever their music helps bars make a buck.

But when the system results in the demolition of a cultural institution such as the Dempsey's Pub Sessions, the whole system can seem a bit out of whack.

In the eyes of former Pub Sessions organizer Dave Barnhill, ASCAP is silencing the very songwriters they purport to protect.

"The horrible thing about it is all those small venues can't afford to pay those fees, so they end up shutting down their open mics and songwriter circles," says Barnhill, a guitarist and singer for The Sunflower Colonels. "If you see those outlets disappearing, I think it's really going to affect the roots music scene and the ability for aspiring musicians to pay their dues. It's just going to make it more to where the only music available is whatever is being piped to us from the corporations. I think that's what this whole thing is about: the American tradition of taking money from people who don't have it and concentrating the wealth."

Barnhill believes that ASCAP is becoming more aggressive at targeting venues like Dempsey's, where live music happens only one night a week or less. He maintains that most of the music performed at Dempsey's was original or public-domain material, though he admits it'd be impossible to altogether avoid copyrighted material.

"Even if you think you're doing traditional material, there's always something that they can catch you on," Barnhill says. "What it was coming to was that (ASCAP) was trying to say, 'No matter what you do, no matter what you think, you have to pay us something.'"

Barnhill says he can sympathize with songwriters who don't see a buck when their music is performed. But he's not sure those songwriters would benefit if Dempsey's agreed to meet ASCAP's demands.

"I just don't think we should have to pay The Jonas Brothers and Beyoncé for us to play bluegrass music," Barnhill says. "By and large the majority of that money is going to artists who are on commercial radio and sell lots of albums - which certainly is nobody that we're covering."

As ASCAP's senior vice president, Vincent Candilora faces down such criticism on a daily basis. He views ASCAP as the defender of the little guy in an industry that's already skewed against the actual makers of music.

"If music didn't draw people into their establishments, venues would give it up," Candilora says. "The music that's being performed has a value, and the establishment is benefiting from that value. A bottle of beer is a lot cheaper elsewhere."

Since 1914, ASCAP has sent checks to artists ranging from Irving Berlin to Kenny Chesney and 50 Cent. It divvies up earnings based on commercial airplay and sales: a potentially slippery paper trail.

When ASCAP comes calling, however, its methods are very precise.

"We only sue establishments for copyright infringement as a very last resort, and normally after a year of pursuing it," Candilora says. "When we finally do have to sue them we can present to the court the fact that we've contacted them 20 times. We give them every opportunity to comply with the law."

ASCAP polices venues, restaurants, hotels, skating rinks and anywhere else music is played in a public forum via a cross-country network of licensing managers. The "aerial" managers essentially act as spies, showing up unannounced to determine whether a venue is violating copyright law.

"Our first step is to educate the user and to make them aware of what ASCAP does," Candilora says. "Like any other property law, if you're going to use what's not yours, you need the permission of the person who owns the property, and you usually need to pay them something." 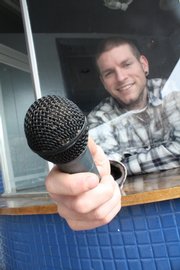 If you're a commercially successful artist who gets radio play and moves units at Best Buy, you probably want ASCAP on your side.

But if you're Hank Osterhout of Deadman Flats, you could give a flying flip.

"There are plenty of other things that bands need to be protected from besides people in bars listening to their music," says Osterhout, who plays bass for the local insurgent-bluegrass act.

"I'm more of a copy-left kind of guy," Osterhout adds. "If you buy a Deadman Flats album, we encourage you to burn it for all of your friends, put it on your iPod, play it in your car, and pick up your guitar and learn the tunes. I would be honored to hear people covering my songs onstage."

In Osterhout's opinion, ASCAP and BMI are outdated models from a bygone era of the music industry.

"There are so many different media outlets and ways that bands can sell their music that you don't need ASCAP or BMI anymore," he says, adding that Deadman Flats obtains a copyright for their albums via the Library of Congress. "We're sort of lucky because we're the people who are making music right now, and we get the opportunity to recreate the industry and use our imagination."

To that effect, Osterhout is firing up a weekly bluegrass night called Mudstomp Mondays in the newly remodeled Granada Lounge. He says he hopes it will pick up where the Pub Sessions left off.

"The Pub Sessions were such a great thing - it was just too bad that it wasn't at a real venue," Osterhout says. "You have this non-blood family that's so connected through their playing. They can be creative together and create beautiful music and have a good time. That's the most important part of the whole situation: having a good time."

And it will be a whole lot easier to do that knowing that The Granada has paid its dues to ASCAP.

Hank, you da man...but not THE MAN. I'll be seeing you on Mondays when I can.