Jamie Oller, a local massage therapist, works with Sam Webb, 7, at MTTI Wellspring in Lawrence. Oller and Sam's mother, Olivia London-Webb, will travel to Vietnam in December to train people there in therapeutic child massage. 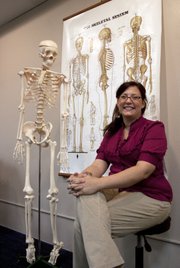 Olivia London-Webb, an instructor at MTTI Wellspring in Lawrence, is one of two local massage therapists planning to teach pediatric therapeutic massage at an orphanage in Vietnam this December.

Each member of the team going to Vietnam with the Liddle Kids Foundation must raise $4,000 for the trip.

For more information on the trip or to contribute, visit www.liddlekidz.com.

Olivia London-Webb wasn’t supposed to make it through the night.

Doctors said she was just too premature to have a chance at a long life. So her mother simply asked for a little bonding time.

“She said, ‘If there’s nothing else that can be done, can I at least hold her?’” London-Webb says.

London-Webb’s mother tucked her infant in her shirt to keep her warm. It turns out that may have saved the baby’s life.

“Now they call it the kangaroo method,” London-Webb says. “That skin-to-skin contact is incredibly important. Mom didn’t know that at the time. She just said, ‘Let me hold my baby.’”

Now 31 years later, London-Webb is hoping to teach the importance of touch around the world.

She’s one of two Lawrence massage therapists who will be traveling to Vietnam this December to teach pediatric therapeutic massage to caregivers at orphanages. The trip is through the Los Angeles-based Liddle Kidz foundation, which aims to spread child massage throughout the world.

During the two-week trip, the 23 foundation volunteers also will help children affected by land mines, Agent Orange, HIV/AIDS and other ailments.

“People all need touch to thrive,” London-Webb says. “If you don’t have touch, you won’t thrive. Touch is the very first sense we get when we’re born and the last one to leave when we die. You have to have that human connection.”

But this type of massage isn’t all exotic scents and soothing music.

Jamie Oller, the other massage therapist from Lawrence going on the trip, says massage with children is very much an individual act, with therapists tailoring their treatments to the client’s specific needs. The sessions could involve simply playing with a child, using puppets or other means.

“When adults think of massage, it’s usually a day at the spa and pampering oneself,” Oller says. “This is more of therapeutic approach — helping you take care of yourself.”

Even in adults, Oller says, massage can help rehabilitate injured body parts, reduce scar tissue or reduce stress levels — which, in its own right, can benefit many functions of the body.

In children, though, the effect can be even greater. According to UNICEF, there are 1.5 million orphans in Vietnam, and many don’t receive direct human interaction on a regular basis, Oller says.

The group’s participants — who were selected from 700 applicants — will use dolls to demonstrate massage techniques. The goal is the local caretakers will be able to keep the therapeutic massage going after the Liddle Kidz volunteers have left.

“With our country’s history with Vietnam, to go and do something positive, I feel really privileged and humbled,” Oller says.

For London-Webb, this trip has been a dream as long as she’s been a massage therapist. She wants to pass on the skills that helped save her own life.

“It’s been very important to me,” she says. “This is the realization of a long dream. I‘ve wanted to do something like this for a decade.”