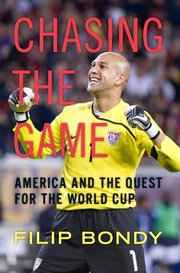 It wasn’t too long ago that the world’s soccer fans considered anything American — players, coaches, national teams — to be irrelevant.

Filip Bondy, a New York Daily News columnist, examines how America got to the point where it can compete in the world’s favorite sport in “Chasing the Game: America and the Quest for the World Cup” (DaCapo Press, $26), and why that sport was ignored for so long.

Bondy profiles star Landon Donovan, coach Bob Bradley, U.S. Soccer President Sunil Gulati and several others in chapters that also follow the team’s effort to qualify for the World Cup in regional matches against Mexico, Costa Rica and others, beginning in the spring of 2008.

He neatly alternates those chapters with others telling why the game, for so long, failed to develop in the U.S., and how people like Gulati, beginning in the 1980s, endeavored to finally make the Americans respectable in the eyes of the rest of the world.

European immigrants brought the game to the United States in the middle of the 19th century, eventually making northern New Jersey and southern Massachusetts hotbeds of the sport. But Eastern colleges and universities, such as Princeton, increasingly turned toward American football, which by the early 20th century was the nation’s most popular fall sport.

The U.S. participated in the first World Cup in 1930, then sent a side to the 1934 tournament in Italy, but were embarrassed by the fascist-saluting Italians in a 7-1 thrashing in front of Benito Mussolini. From there, soccer languished in America. No national side entered international competition until 1947, and the upset 1-0 win over England at the 1950 World Cup barely registered back home.

It wasn’t until the 1970s, when the famous Pele came from Brazil to play in the now-defunct North American Soccer League, that soccer began to see some life in the U.S.

In 1989, the Americans were still considered “consistently horrible, even irrelevant.” But they managed to qualify for the 1990 World Cup — their first in 40 years — thanks to a bit of luck (Mexico had been suspended from international competition) and a hard-fought win over favored Trinidad and Tobago.

The U.S. hosted the tournament in 1994, a rousing financial success that helped give birth to Major League Soccer. The U.S. Soccer Federation has since invested in discovering and developing young talent — Donovan is one of several U.S. team members to have benefited from the initiative.

Bondy recounts historic wins over Portugal at the 2002 World Cup and Spain in 2009. Other chapters explore the rivalry with Mexico, the limited success of American players in European professional leagues and the formation of Sam’s Army, a traveling band of supporters of the U.S. national team based on European models.

The book is good preparation for the American sports fan willing to make room for the monthlong tournament amid baseball and the NBA Finals, and for those would like to gain more than a passing familiarity with Donovan, goalie Tim Howard and other leading American players.