Amy Meirin rehearses with the orchestra during the Midwestern Music Academy’s Junior High Music Camp. More than 65,000 students have gone through the camp in the last 75 years.

Chloe Gilligan was in harmony heaven.

The ninth-grader knows there are some students who are serious about music at West Junior High School, where she attends during the school year. But for a week this summer, she was surrounded by hundreds of students who treat music as much more than a hobby.

“It’s awesome to be around a bunch of other music nerds,” says Gilligan, a tuba player. “Everybody here is as passionate about music as I am.”

That’s the way it’s been at the Midwestern Music Academy for decades.

The academy, housed at Kansas University’s Murphy Hall, is celebrating its 75th anniversary this year. This summer, between 400 and 500 students in grades three through 12 will immerse themselves in musical training. In all, 65,000 students have gone through the camp in its 75 years.

A euphonium player rehearses with a band during the Junior High Music Camp, part of the Midwestern Music Academy at KU.

“There’s an alumni list that’s really humbling,” says Dan Gailey, a KU faculty member in his first year as camp director. “There have been some amazing people who have come through here.”

The academy was founded Russell Wiley, the famed former director of KU bands. Back then, the focus was broader, incorporating both music and art. High school students stayed a full month.

“Kids want things that are more specialized,” Gailey says. “It’s more boutiquey. The demands on kids are greater. They have so many irons in the fire.”

The Jayhawk Junior Musicians, which begins today, is a new camp for children in grades 3-6. It will include signing, reading and writing music, playing instruments and other musical experiences.

Many participants in the older camps stay in KU residence halls during their stay. During the day, they have group rehearsals, musicology classes and sectional rehearsals, all leading up to a concert. Guest conductors lead most of the classes. At night, campers have organized social activities.

For some of the students, the camp is where they will decide to pursue a career in music. That was the case for Robert Walzel, who started June 1 as KU’s inaugural dean of the School of Music. 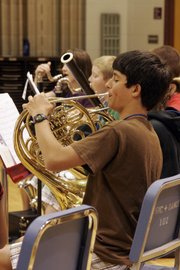 Tommy Finch, a student at Central Junior High School, plays French horn with a band in the Junior High Music Camp at the 2010 Midwestern Music Academy.

Walzel attended the camp twice in the 1970s, both as a junior high and a high school student. He was from a small town near Houston, Texas, but his band director suggested he spend the summer in Lawrence playing clarinet. After the high school camp, he made the decision to pursue music professionally.

“I remember coming back and having to write a career paper,” he says. “I was so jazzed up about the experience I had there, I knew I wanted to be a musician.”

For Earle Dumler, a reed player studio musician in Los Angeles, attending the KU camp reinforced his decision to continue studying music after high school. Dumler was from Russell and primarily played oboe at the time.

He loved it so much he went on to attend KU and worked as a counselor for the next generation of students.

“I never doubted that I could be a musician, but that really solidified my decision when I came to that camp,” Dumler says. “I got thrown into the mix with some of the top talents from all over the country. Of course, you always have some trepidation about stuff, but that’s where I learned to believe in myself.”

Dumler went on to have a long touring and recording career that included work with Frank Zappa, Barbra Streisand, the Carpenters and Stan Kenton. He also has played on more than 1,000 motion picture scores.

Those are the sorts of stories Walzel latches onto when he tells people about the music camp, and especially now that he’s helping to oversee it. He’s seen plenty of other good music camps falter over time, but he has confidence the Midwestern Music Academy will thrive.

“Society loses when students don’t have an opportunity to play and learn music during their junior high and high school years,” Walzel says. “Here, they don’t have the burdens of the regular school year.”

That’s what attracted seventh-grader Mason Wheatley from Morrison, Okla., to KU for a week in June. The trumpet player raised money from his family to attend. He wants to come back next year.

“Oh, yeah,” he says. “I talk to my mom every night. She said she’s starting to save money for next year.”