Kansas University Peace Corps representative Ben Wiechman swims with friends at a waterfall in Saint Lucia while serving abroad for the Peace Corps.

Students in Mongolia paint a world map in their geography classroom with assistance from Peace Corps volunteer Elizabeth Durkin. 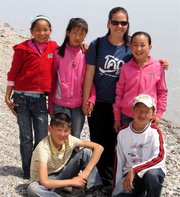 The village of Mörön is approximately 6,250 miles from Lawrence in northern Mongolia. Its 40,000 inhabitants are served by an airport with two runways, one of which is paved with gravel.

Mörön is where Peace Corps volunteer Elizabeth Durkin landed five years ago to begin her 27 months of service. She was promptly greeted with a goat’s-head dinner and a perplexing sink.

“We couldn’t figure out where the water went — if there was a pipe that led outside or whatever,” Durkin recalls. “We talked about it for days and days and finally we figured out that there was a bucket underneath it that you had to dump out in the street.”

Two years later, the idea of modern plumbing was a distant memory for Durkin, who taught health education at Mongolian hospitals and schools. Like most Peace Corps volunteers, she learned by the seat of her pants and ended up with an experience that was as gratifying as it was intimidating.

“A lot of people have it in their mind that international development work is sunshine and rainbows, and it’s really not,” Durkin says. “Anytime you choose to do anything you’re going to have to give up something … You never know what wonderful things will happen if you take that chance.”

This week, prospective Peace Corps volunteers will have the chance to hear stories like Durkin’s during Kansas University’s Peace Corps week. The week kicks off tonight at the Kansas Union with an event titled “Stories from Returned Volunteers.”

The events are open to both students and community members, taking into account the fact that Peace Corps volunteers come from all walks of life (7 percent are over the age of 50). The government agency has endured since its inception in 1960 under John F. Kennedy, sending more than 200,000 Americans abroad as ambassadors of goodwill in developing countries.

President Barack Obama recently requested $446 million for the Peace Corps in his 2011 budget, seeking to make good on a promise that his predecessor neglected.

“Every president usually says that they’re going to increase the (Peace Corps) budget,” says Durkin, who served the past two years as KU’s Peace Corps representative. “When (George W.) Bush took office, he said that he wanted to double the size of the Peace Corps, but for whatever reason it didn’t happen.”

More than 1,500 Kansas residents have served in the Peace Corps since its inception, and that number should continue to grow as the agency’s budget expands from $340 million in 2009 to $400 million in 2010.

“This year we’re going to try to send 6,000 (volunteers), and hopefully by the end of next year we’ll be sending 10,000,” Durkin says. “There’s such a huge demand in developing countries. Where I was in Mongolia, each town would request a Peace Corps volunteer, and it usually took them five years to get one.”

Fortunately, the supply of able and willing volunteers still exceeds the demand. The Peace Corps saw an 18 percent increase in applicants in 2009, selecting approximately one out of every three to serve.

“You need to demonstrate motivation, commitment and flexibility,” Durkin advises. “The Peace Corps was my top choice because of the grass-roots type of work that they do. They work at the local level, which a lot of non-government organizations don’t do.”

For those willing to consider the prospect of leaving life as they know it behind for 27 months, the biggest deterrents are concerns about health and money.

Former volunteer Ben Wiechman says that he overcame his safety concerns by talking to returned volunteers. Once he discovered that he could get 30 percent of his student loans forgiven and the rest deferred for the length of his service, he went all-in.

“You’re not making any money, but you’re also not going further in debt,” says Wiechman, who received a stipend to cover his cost-of-living and traveling expenses.

“A lot of people say, ‘Why are you wasting two years of your life?’ But in the end it actually does help you achieve your long-term career goals, even if you want to go into the corporate world. Employers like to see international experience.”

Wiechman recently became KU’s Peace Corps rep after returning from two years of service in the Caribbean Island of Saint Lucia. Though he was often mistaken for a tourist, Wiechman helped local farmers obtain United Nations funding for a composting project and taught native musicians how to transcribe music to preserve their folk traditions.

“Ultimately, you learn through your mistakes,” Wiechman says. “That’s part of the excitement of Peace Corps: You don’t quite know what you’re going to get. I think it appeals to people who have that sense of adventure and want to go out on a limb to see what happens.”

For future Peace Corps alumni, the adventure begins this week.