Apocalypse on the Kaw: Memoir explores Lawrence's history of violence and the nuclear paranoia of 'The Day After'

Selected clips from the film. 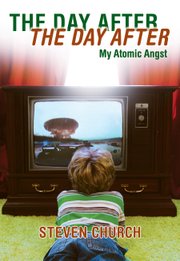 Steven Church's new book, "The Day After the Day After" (Soft Skull Press).

When Steven Church sat down to write his memoir about growing up in Kansas, like many Lawrence children of the '80s, he recalled fond childhood memories of mushroom clouds, irradiated ghouls and the total collapse of human civilization.

Church funneled that wistful nostalgia for nuclear holocaust into "The Day After the Day After" (Soft Skull Press), his new book chronicling Armageddon and pop culture in Kansas. He uses the much ballyhooed 1983 television movie "The Day After," the nuclear strike drama that was filmed in and around Lawrence, as a post-apocalyptic backdrop for his exploration of Kansas catastrophes from Quantrill's Raid to the Greensburg tornado.

"Initially the book started by me trying to write about this movie, which I and many people in my generation who grew up in the '70s and '80s remember very vividly," says Church, Kansas University grad and author of "The Guinness Book of Me" and "Theoretical Killings." "Or they remember the hype surrounding it, maybe even more than the movie itself. It becomes a focal point for some of the questions I'm trying to ask about the meaning of apocalypse and the meaning of Kansas and Lawrence, which is seen as kind of a symbolic landscape. The movie 'The Day After,' the more I wrote about it and the more I discovered about it, was sort of just one more apocalyptic story in the history of Lawrence and Kansas."

Church makes a compelling case that Kansas, far from the idyllic image cemented in the public consciousness by "The Wizard of Oz," is a hotbed of death and disaster. Whether it's Bleeding Kansas border massacres in the 1860s or KU campus bombings during the Days of Rage in the 1960s-'70s, violence lurks behind the squeaky clean façade of the Sunflower State.

"For those of us who've lived there, we know Kansas isn't the picture of innocence everybody assumes it is," says Church, who now lives in California. "Kind of like how Lawrence isn't really flat. There're hills everywhere! I went to school on a mountain! So it has this odd reputation. I've always been really interested in the movie and pop culture portrayals of Kansas. References to Kansas have become a kind of standard line in action movies. Somebody at some point always goes, 'You're not in Kansas anymore.' It's become a cliché. What does it even mean? Obviously people have this investment in the meaning of Kansas."

That fantasy of Kansas as heartland ideal seems to make it an appealing setting for the end of days.

"If you're going to tell a story about the end of the world, you need a world that's the picture of simplicity and innocence and Midwestern purity or whatever," Church says. "We know Lawrence isn't really like that. It has an underbelly."

Regardless of how the city was portrayed, images of Lawrence's annihilation in "The Day After" certainly struck a nerve. "The morning after the movie was broadcast, I awoke to the astonishing fact that 100 million people had watched this movie," recalls Nicholas Meyer, director of "The Day After," which remains the most watched television movie of all time.

"It will hold that record because there are now too many channels for that to ever happen again. Half the United States sat and watched this movie on a November night in 1983. It had a gigantic impact. It changed the mind of the president of the United States about the notion of a winnable nuclear war. I didn't understand its impact at the time, but then I read Reagan's memoirs where he talked about seeing 'The Day After.' After he saw the movie, he went Reykjavik and signed the intermediate range missile treaty with Gorbachev to the fury of his conservative backers and adherents."

Lawrence had become, at least for the fall of 1983, the Cold War paranoia capital of the world.

"Ted Koppel was interested, reporters from The New York Times, Time, Newsweek, BBC and so on - those were just some of the ranks of journalists in Lawrence," remembers Chuck Berg, professor of film and media studies at KU, who also scored a cameo in "The Day After" as a hideously burned mutant.

"I probably did five or six phone interviews with people literally from all over the world. I remember talking to someone in Germany, someone in London, and someone in Tokyo. They all wanted to know something about the film. We were living in the midst of the Cold War in the '80s. There was concern about mutually assured destruction. Going back to Truman, there was a whole lineage of nuclear holocaust possibilities. Novels, movies and stories having to do with the Cold War and nuclear destruction were just part of the zeitgeist of the period. Many, many people around the world viewed 'The Day After' as an important cultural and political event."

Even in the face of international media furor, Lawrencians took it all in stride. After all, how often does your city get blown up on prime time?

"The crew would be running around looking for a barn they could burn down or a couple of guys in their sixties who have overalls that could play farmers," says Berg. "There was a palpable kind of excitement. You'd be driving along and a block would be cordoned off because they would be shooting a scene, but no one minded. We all thought it was neat. Hollywood came to the Kaw."

And Hollywood left no survivors. "I guess the thing that was disturbing about 'The Day After' for those of us who lived in Lawrence was that apocalypse up to that point had been an abstraction," Church says. "The movie made it very personal. I was watching friends of mine get vaporized."

"The Day After" was just another chapter in Lawrence's legacy of apocalypse, one which came to a close with the end of the Cold War. But don't worry about Church - he's brimming with enough existential dread to write another book.

"Unfortunately, I think apocalyptic anxiety just shifts," he says. "I have kids now, and as I suggest in the book, it changes. Your world gets smaller when you have kids. You focus on their life and their world, but the stakes get bigger. Apocalypse for me now is the fear of something happening to my kids. Me? Whatever. I've lived through one apocalypse, even if it was fake, so I can live through another one."