Erin Curtis-Dierks’ children play outdoors in Lawrence. Their mother says they limit technology fairly well, with limited TV time and a game on the Wii once a week or less. 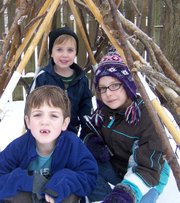 Sandy Beverly/Special to the Journal-World

Simon Ruland, 7, Max Ruland, 3, and Jadelin McLeod, 7, sit inside a stick teepee, one of several natural play spaces in the Rulands’ yard.

Sandy Beverly distinctly remembers when video games first came out in the ’70s.

As a kid, she spent lots of time playing text-based adventure games on an early Texas Instruments computer, then the classic “Pong,” and, eventually, her parents got an Atari for games like Pac-Man.

It was a transformative time for childhood entertainment — the dawn of today’s Nintendo Wii, Nintendo DS, online games and all kinds of other games kids play today. But she’s not exactly nostalgic about all that.

“It’s the memories of outdoor time that are more powerful and real, that evoke emotions and a sense of nostalgia,” Beverly says. “So many of us at our age remember just playing outside. That’s what we did. Our parents didn’t have to say, ‘It’s time for your outdoor time.’ It’s just what we did, so it became a part of us. I worry that it’s not a part of kids’ experience now.”

Of course, these days there are a great many indoor distractions competing for kids’ attention — video games, computers, the Internet, DVDs, entire cable channels devoted to kids.

Recent studies show that that kids ages 2 to 5 years old average more than 32 hours of TV a week. And half of U.S. kids play at least six hours of video games each week.

Beverly’s 3- and 7-year-old boys are well below average in that respect because she limits their total “screen time” to six hours a week. She says if she didn’t, no doubt they would be glued to the couch as much as most kids.

“For me, that’s the main motivating factor for limiting screen time. I want my kids to be doing other things. I want them to be getting bored sometimes so they have to think, ‘What am I going to do to entertain myself?’ Or ‘How am I going to get along with my brother, even though he’s not my favorite playmate?’”

That’s no small challenge, especially when turning on the tube or the Wii can be such a seductive way for parents to free up some time of their own.

That’s one reason why Beverly and seven other like-minded moms from Lawrence decided to form a group to help keep each other educated and motivated to raise their kids mindfully. They use a discussion packet from the Northwest Earth Institute called “Healthy Children, Healthy Planet” ($20 via nwei.org)

That’s pretty much the approach, too, at East Heights Early Childhood Family Center, says principal Cris Anderson. She says they’ve made a conscious decision to not incorporate too much technology into their curriculum.

“We have looked at trends around the country as far as what’s been missing from children’s ‘diet’ in an educational setting and in their home setting. Things that continue to come out include children not having enough outdoor playtime, which substantiates the increase of obesity in young children,” she says.

“If you don’t like to be outside, you’re not going to want to exercise outside — it’s as simple as that.”

Anderson says that, more than just being an opportunity to stretch their legs and run out the crazies, outdoor time helps improve many kids’ learning development.

Sandy Beverly/Special to the Journal-World

“Some kids are just more comfortable outside exploring, maybe without even knowing they’re more comfortable,” she says. “So you take this concept of ‘same and different,’ ‘more and less’ and all of a sudden it brings a whole other meaning when you’re outside playing in the dirt or gathering bugs. It just opens of more opportunities when kids can extend their learning outdoors.”

Erin Curtis-Dierks’ kiddos are certainly more comfortable outside. Winters can be rough, but as soon as it warms back up, her two kids spend hours outside exploring and picking up sticks, rocks, dirt, worms or bugs — especially her 3-year-old son.

“He asked me just yesterday if he could go outside so he could use his new magnifying glass to explore the backyard. I love that he loves to just find things, and he finds the simple things that we take for granted absolutely fascinating,” she says.

She says they keep technology-based fun to a relative minimum — the TV’s downstairs and out of the kids’ minds for the most part, they play the Wii as a family maybe once a week, and the Thomas the Train games on her iPhone are pretty much just for those times they’re stuck somewhere and the kids are getting impatient. But that’s about it.

“We like to draw from our childhood experiences and try to expose our kids to more outdoor activities than to technology. But we also don’t keep all technology from our kids. We know they are growing up with so much more than we ever did, and that’s OK,” she says.

Here is a great follow up video that hits some of the same notes.

It's called "The Advertising Age and the Human Ego" http://www.filmsforaction.org/film/?Film=556

Intercutting thousands of contemporary and classic television commercials with insights by Stuart Ewen, Jean Kilbourne, Sut JhalIy and others, this film scrutinizes late 20th century American society and its prime inhabitant, Consumer Man. You will never look at an ad the same way again after viewing what critics are calling "the first comprehensive documentary on the cultural impact of advertising in America."

The opening quote reads: "A democratic civilization will save itself only if it makes the language of the image into a stimulus for cultural reflection, not an invitation for hypnosis." -- Umberto Eco