Net worth: Internet predictions turn out erroneous ... sort of 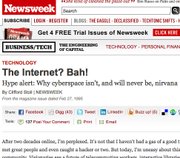 Everybody’s an armchair psychic this week.

Something about the NCAA tournament makes even the most tight-lipped of personalities blather on about their clairvoyant capacities.

I know I do — that’s why I’m proud to predict Kansas, Syracuse, West Virginia and Villanova in the Final Four.

But if the Mountaineers don’t top the Jayhawks like my semi-legal tournament pool selection states, no big deal. It’s not as if I’m a basketball expert or anything. It’s not like anybody will remember my predictions a few months from now.

But what if a prophecy you once made came back to haunt you? And for the last 15 years, what if you’ve been forced to defend, second-guess or live down your know-it-all perspective?

Such is the case with author Clifford Stoll.

A Newsweek column Stoll wrote on Feb. 27, 1995, has become all the rage online recently. The title alone explains why: “The Internet? Bah!”

The subhead deepens the hole: “Hype Alert: Why cyberspace isn’t and will never be, nirvana.”

In the article, Stoll condescendingly dismisses a number of Internet predictions that have since become part of our everyday existence.

He writes: “Visionaries see a future of telecommuting workers, interactive libraries and multimedia classrooms. They speak of electronic town meetings and virtual communities. Commerce and business will shift from offices and malls to networks and modems. And the freedom of digital networks will make government more democratic. Baloney.”

Stoll poo-poos the notion that people will buy books over the Internet (“Uh, sure” is how he addresses it).

He claims “no online database will replace your daily newspaper” (“As if” — that’s my addition).

He dismisses multimedia as a teaching tool, explaining “these expensive toys are difficult to use in classrooms” and require far too much extensive teacher training.

The astronomer and author of 1996’s “Silicon Snake Oil — Second Thoughts on the Information Highway” poses a litany of things that won’t ever transpire over the Internet: catalog shopping, airline tickets, restaurant reservations, etc.

“So how come my local mall does more business in an afternoon than the entire Internet handles in a month?” he defends why stores will never become obsolete.

“Even if there were a trustworthy way to send money over the Internet — which there isn’t — the network is missing a most essential ingredient of capitalism: salespeople.”

Just to clarify, nobody will ever “miss” salespeople.

I tried to reach Stoll, but a message on his incredibly lame Web site (surprise) explains: “I’ve been busy with astronomy projects, writing and speaking. Most of my time, I’m a stay-at-home Daddy. Because of this, I’m unable to answer all my e-mail.”

It wasn’t that I wanted to berate Stoll for being so off-base. Actually, the opposite. The distressing part about Stoll’s diatribe is that he’s remarkably on-point about a number of other Internet elements. Many of his arguments make perfect sense.

For instance: “What the Internet hucksters won’t tell you is that the Internet is one big ocean of unedited data, without any pretense of completeness. Lacking editors, reviewers or critics, the Internet has become a wasteland of unfiltered data.”

Quick, let’s look up “unfiltered data” on Wikipedia. Ten bucks says it will bring up a “Star Trek: The Next Generation” reference.

How about this prescient notion: “The cacophony more closely resembles citizens band radio, complete with handles, harassment, and anonymous threats. When most everyone shouts, few listen.”

Wow, sounds like he’s been reading the comment threads on any recent article posted to the Journal-World.

Stoll is a regular Nostradamus.